Jeff Richards, 39, taking over as president at Absher Construction 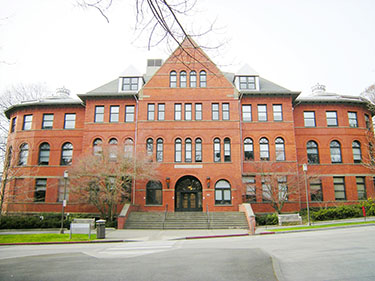 Absher Construction has been operating in Puyallup since 1940 with a member of the Absher family at the helm.

That all changes next month, when longtime employee and COO Jeff Richards becomes the company's fourth president. He takes over for Dan Absher, who will continue as CEO and co-owner with his brother, Tom Absher Jr.

“I feel very comfortable we found the right person for the job,” he said.

Richards, who has been at the company for 15 years, will continue as COO.

The 39-year-old Richards said his first taste of construction came as a laborer during college for a residential remodeling company. He found he enjoyed working with his hands and ended up earning a bachelor's degree in construction management from the University of Washington.

Richards takes over during a strong cycle for the general contractor: revenues will be about $330 million this year and are expected to hit $450 million next year. About 300 employees work in the office and field.

Dan Absher said the anticipated jump in revenue is due to several big projects starting.

Here are some of the firm's larger local projects:

• Partnering with Kitchell on the Emerald Queen Casino and parking garage in Tacoma for the Puyallup Tribe of Indians; finishing November 2019.

• First phase of the $150 million Tacoma Town Center, a two-block project that will eventually have over 600 housing units, retail and office space; the first phase — 228 housing units — finishes in early 2020.

• Oak and Parrington halls at the University of Washington; both starting in early 2019 and taking 14 months to build.

Outside of the Puget Sound area, the company will continue with projects in Eastern Washington. Hawaii is another market for Absher, with one Department of Defense project underway and two or three others being considered.

Richards said he has heard the warnings that construction will slow down, but project volume at Absher won't drop anytime soon. He said the firm has been selective about jobs, partly due to the tight labor market.

Dan Absher said pricing and budgeting are a “wild card” due to the shortage of subcontractors.

This transition plan has been years in the making. In 2013, four top executives retired early to pave the way for others to advance. Tom Absher Jr. was one of those early retirees.

Dan Absher said the plan is to keep the company closely held in his family, but work toward some ownership by key employees over the next five years.

Moving Richards to president will allow Absher to focus on corporate strategy and business development.

Absher doesn't plan to retire, at least not immediately. He said he will probably “slow down over the next five years” as part of the transition plan.

“Jeff's promotion to president is the culmination of a long and deliberate transition process to ensure our and our clients' continued success well into the future,” he said.