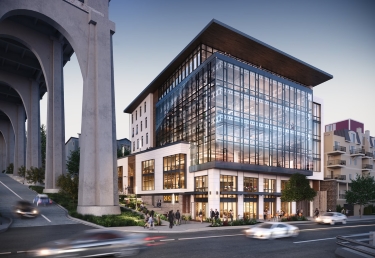 Image from Weber Thompson [enlarge]
Watershed is under construction in the shadow of the Aurora Bridge in Fremont. 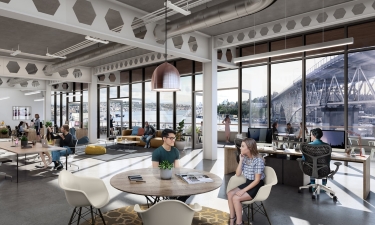 Hess Callahan Partners announced construction is underway on its Watershed Building in Fremont, following a groundbreaking ceremony about three months ago. It should be finished in early 2020.

Crews are now removing a small building that was home to Cafe Turko, coffee shop Milstead & Co. and a 25-stall rooftop parking lot. Cafe Turko and Milstead both relocated nearby, from just east of the Aurora Bridge to just west of it.

Clearing the site at 900 N. 34th St. will make way for the seven-story Watershed Building, which is designed to be the third building in the Seattle Living Building Pilot Program.

The new building will have 60,000 square feet of Class A office space and 5,600 square feet of ground-level retail space. One of its key sustainability elements will be its ability to treat polluted stormwater from an adjacent street and the Aurora Bridge that towers above through a series of stepped bioretention planters. The system will treat over 300,000 gallons of stormwater yearly from the bridge and Troll Avenue. Another 200,000 gallons of stormwater from the building's roof will be collected and reused.

The project is a partnership between Hess Callahan Partners, Mark Grey and Spear Street Capital.

The Puget Sound Business Journal in April had reported that WeWork was interested in taking all of the office space. The DJC asked JLL to comment on leasing, and Low said, “Watershed is attracting a lot of interest from potential tenants and is actively targeting both single floor users and full building prospects.”

(Editor’s note: This story has been updated to add the response from JLL.)

JSH's website shows two retail spaces: one about 3,000 square feet and other about 2,600 square feet. Asking rates are $45 per square foot, triple net.

Turner Construction is the general contractor and Weber Thompson is the architect and landscape architect.

“Watershed allows us to take what we've learned from some of our most ambitious sustainability projects to date and dig deeper to find new ways to showcase practical, achievable deep green design,” said Kristen Scott, architect and senior principal at Weber Thompson, in a news release. “Our goal is to inspire, through design, a stronger connection to place, community, and the environment around us.”

Here are some of the sustainable elements:

• Salmon Safe Certification to help maintain the native salmon population in the watershed.

• Use of reclaimed rainwater for toilets and irrigation.

• Storage for up to 100 bikes, and post-ride amenities like lockers and showers.

The city's Living Building Pilot Program incentivizes deep reductions in energy and water usage. Its goal is to reduce total energy usage by at least 25 percent and total water usage by 75 percent.

The two other buildings to qualify for the program are Bullitt Center and Stone34.