AGC of America’s Brian Turmail was one of the featured speakers at Friday’s annual meeting of the local chapter in Bellevue.

The DJC spoke with Turmail about what’s going on at AGC of America and what the construction industry faces. His answers were edited for style and length.

Q: How did AGC of America get started?

A: By the end of World War I, there was a general move for industries to organize themselves via national associations. As part of that move, in the summer of 1918, the U.S. Chamber of Commerce attempted to organize a meeting of contractors. But the general contractors who attended the meeting in Atlantic City that summer felt that the meeting was over-represented by subcontractors. So, they organized their own meeting in the fall of 1918 in Chicago.

During the Chicago meeting, a group of general contractors voted to establish the Associated General Contractors of America. After that, as part of our plan to grow, AGC incorporated several existing local and regional construction associations, which laid the foundation for our current chapter structure. 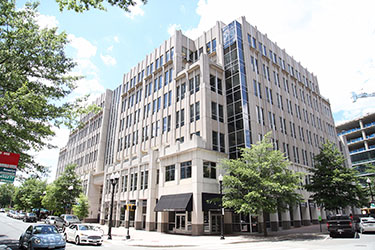 AGC photos [enlarge]
AGC of America’s headquarters have been in the Navy League Building in Arlington, Virginia, since 2005.

Q: What are two big accomplishments by the AGC over the years?

A: I think the first big accomplishment is that we have spent a century now as the voice of the commercial construction industry in Washington, D.C., and across the country. As that voice, we have amassed a long track record advocating for, educating and connecting the construction community.

If I had to rate our second big accomplishment, it would have to be helping the commercial construction industry thrive and continue to expand during a century that has seen the way projects are designed, built and delivered change time and again. We helped our members figure out how to use new methods and materials, how to navigate ever-changing labor issues, cope with the massive growth in local, state and federal regulations, understand how to adopt new techniques and new technologies, and become safer and more efficient.

We will rely on this experience significantly as the industry undergoes what we expect will be its most dramatic transformation yet, as the kind of forces that have disrupted so many other segments of the economy come to the construction industry. In particular, labor shortages and the introduction of increasingly affordable, and adaptable, technology, will fundamentally alter much of the way many firms do business.

Q: How will technology shape the construction industry?

A: Technology will shape the construction industry in fundamental ways.

First, technology will enable firms to become even more efficient as it allows them to measure and evaluate every aspect of the construction process, from the movement of the workforce, utilization of equipment and tools, and the logistics of receiving, storing and installing materials. Indeed, we already see drone and laser scanning technology enabling firms to be more efficient in the way they survey sites, track progress and measure items like amount of aggregate delivered.

Technology will also allow firms to operate more safely — both by giving firms better insight into the kinds of situations where accidents occur, and by allowing workers to operate more safely. A great example of that is with exoskeletons, which many member firms are using to allow their workers to perform repetitive and potentially harmful motions more safely. Technology is also likely to lead to greater automation on jobsites — reducing workers’ exposure to potentially dangerous conditions.

Technology will also enable adoption of more efficient building techniques. For example, more accurate site surveys and measurements will make it easier and more cost-effective to perform off-site prefabrication and “assemble” projects in a modular fashion. And it will continue the advancements BIM has enabled in improving the quality and impact of the preconstruction process and the rapid and relatively painless changes to projects after construction has begun. 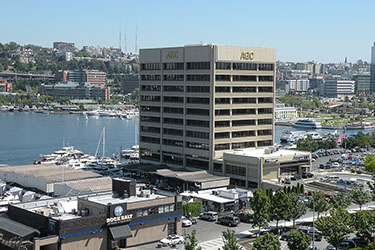 [enlarge]
AGC of Washington has its own building on the southwestern shore of Lake Union in Seattle.

Q: In the long run, will technology reduce workforce demand?

A: We think it will change workforce demand more than reduce it. Firms will need to hire more people with the skills needed to process and analyze data, code programs and operate and maintain remote-controlled equipment and autonomous gear. Firms will also be able to offer more craft worker positions in climate-controlled prefabrication facilities. In the end, we see an industry that continues to employ many people, but just in different types of positions than those that exist today.

Q: What are the biggest challenges faced today by the industry?

A: There is no doubt that the biggest challenge facing the construction industry today is the shortage of qualified workers available for firms to hire. Our members regularly rank workforce shortages as their single greatest worry, and more than two-thirds of them report they are having a hard time finding qualified workers.

This is happening for three reasons:

1. Demographics. Like many other segments of the economy, we have a lot of aging workers who are retiring in large numbers.

2. Hangover from the Great Recession. The industry shed nearly one-third of its workers during the economic downturn and was one of the first to let folks go and the last to start hiring again. As a result, many of those displaced workers left for other professions, including the energy sector, and never returned.

3. Failure to invest in career and technical education. Simply put, our society no longer values craft professions like construction and we have expressed that by dismantling what was a once robust vocational education system in this country. As a result, relatively few young adults are even made aware that construction is a career worth considering.

We have been working to address these problems by constantly pushing for the measures outlined in our workforce development plan — including boosting federal funding for career and technical education, enacting comprehensive immigration reforms and improving federal adult workforce training programs.

Q: How does AGC of Washington compare to other chapters?

A: The AGC of Washington is a great chapter that does a tremendous amount for our industry and our national association. I can’t think of another part of the country where you see so many AGC logos on display on construction sites and I think that is a real tribute to the strength of the chapter. And while we typically don’t play favorites, I think it is safe to say the chapter has the most iconic of any of our chapters’ headquarters structures. You can’t beat that Lake Union view.

Seriously though, this is a very strong chapter that makes our industry and our national association better because of the work it and its members do.