Big claw arrives to start tearing down the viaduct 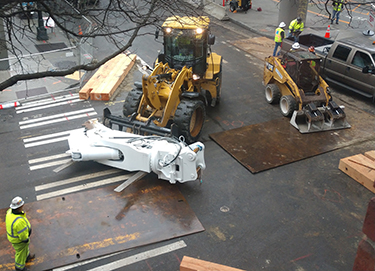 Yesterday, subcontractor Ferma brought in a giant processing claw and connected it to an excavator below the Columbia Street on-ramp to the Alaskan Way Viaduct.

Crews moved the claw using a Caterpillar 924K wheel loader. The excavator appeared to be a Volvo EC380EL, though there were no markings on it and the operator declined to comment.

The claw will be used to bring down the ramp as part of the initial work to remove the viaduct. Crews will start at First Avenue and work their way toward Puget Sound.

Kiewit Infrastructure West is the design-build contractor for the $93.7 million demolition job. It has been preparing for weeks — and actual demolition is expected to start today.