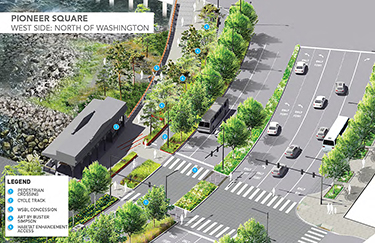 Image from city documents [enlarge]
Most of the new Alaskan Way will be two lanes in each direction. It will expand to eight lanes near Colman Dock, partly to handle ferry traffic.

The city of Seattle is bidding the new Alaskan Way corridor along the waterfront, a highly visible project that could result in one contractor winning the $185 million job because of a hidden utility vault.

That vault triggered a protest from Gary Merlino Construction Co., which submitted one of the four bids that were opened March 6.

In a March 11 letter to the city, Merlino President Charlie Oliver said bids from Atkinson and Walsh should be rejected because they failed to identify the HVAC subcontractors on a ventilation and cooling system for the vault to hold equipment for operating the relocated Tsutakawa Fountain.

Oliver referred to state law that says a prime contractor must list its HVAC, plumbing and electrical subs (or itself) on public projects costing over $1 million.

Walsh program manager Ray Riojas wrote in a March 14 letter to the city that the vault is not for human occupancy, since its purpose is to house the fountain's equipment, and doesn't require an HVAC subcontractor. Riojas wrote that a fan was identified in the fountain drawings but not in the specifications. He added that Walsh's plumbing subcontractor, Shinn Mechanical, was to install the fan shown in the drawings.

Atkinson vice president Brandon Dully wrote on March 15 that his firm did not have to list the HVAC subcontractor because Atkinson wasn't directly contracting with it — instead it tasked subcontractor KLB Construction with hiring lower-tier subcontractors for HVAC and plumbing.

The city has since rejected all but Merlino's bid, noting the other three contractors were non-responsive. In doing so, it identified Merlino as the apparent low bidder.

The city is now evaluating Merlino's bid to ensure Merlino is capable and qualified to do the work. Once that is done, the city will award the project to Merlino.

The project will build a new Alaskan Way corridor from South Dearborn to Pine streets, and a new Elliott Way corridor from Pine to Bell streets. It will be used by cars, transit, trucks, pedestrians and bicycles. A promenade with continuous public open space between the roadway and the waterfront is included.

Construction is estimated to cost between $165 million and $185 million, and is expected to be finished within 1,400 calendar days.