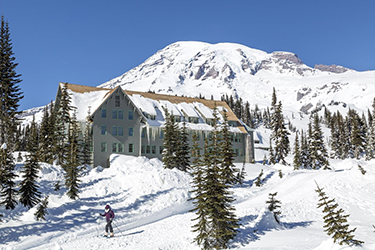 Photos from Korsmo Construction [enlarge]
Up to 30 feet of snow fell during the winter, making the site sometimes difficult to access.

Working at 5,400 feet above sea level has its challenges. That's what John Ashworth of Korsmo Construction will tell you about the recently completed $24.5 million renovation of the Paradise Inn Annex at Mount Rainier National Park.

The National Park Service on Friday will open the 79-room annex and adjoining 42-room main inn for the season. A ceremony that day will mark the completion of 19 months of work on the annex.

The nearly century-old annex had been suffering under the weight of heavy snow over the years, resulting in walls and floors that were skewed and out of plumb. Ashworth said about a third of the building had dropped 6 inches.

Robbins and Co. raised the annex and supported it with cribbing, then Korsmo crews formed footings and shotcreted a new foundation.

Ashworth said they started the project in August 2017 and had to have the building raised and the new foundation finished before heavy snows arrived in mid-October. They finished that part in the nick of time — he said it started snowing “virtually that day” and didn't let up.

One of the big challenges of the project was removing the old foundation, which consisted of a 4-foot-deep stack of stones.

Ashworth said they logged the location and configuration of each stone before removal. Stones were tagged and photographed before being trucked to Keystone Masonry's shop in Yelm. Keystone cut the stones into 8-inch veneers and trucked them back up the mountain for installation on the new foundation.

Ashworth said the veneers are indistinguishable from the original stack of stones.

“There were a lot of rocks in there,” he said about the foundation. As a ballpark estimate, he said several thousand stones.

During the winter, workers had to be escorted in caravans to reach the site in the morning and to get home at the end of the day. Ashworth said there was up to 30 feet of snow during the winter, which also make getting equipment, materials and debris off the mountain a challenge. 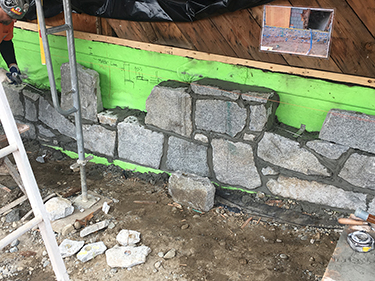 [enlarge]
The stones that make up the original foundation were cut into veneers and installed on the new foundation.

Other work on the nearly 22,000-square-foot building included structural upgrades, fire-system updates and energy-efficiency improvements. Ashworth said the building was fortified with over 2 miles of metal strapping in the floors, walls and roof. He said the materials for that filled an entire semi-trailer.

The building's old fire sprinkler pipes would freeze and break every winter, despite efforts to drain the system. Ashworth said the new system resolved that problem.

Crews also restored historical architectural elements, such as interior trim, wood moldings and windows. About 90% of the trim was restored and the rest was replaced because it was too damaged or missing.

Bear Wood Windows of Lakewood removed all the windows and trim and refurbished them. Ashworth said about 20% of the windows were replaced by replicas because the old units couldn't be saved.

Finally, a snow bridge connecting the main inn with the annex got new siding, roofing, interior finishes and electrical systems.

Even working during the summer wasn't easy — there were 1.5 million visitors in August alone. “Trying to keep the lookie-loos from being hurt was a big challenge for us,” Ashworth said.

About a decade ago, Korsmo rehabbed the main inn and built the Henry M. Jackson Visitor Center. Many of the firms involved with the inn project came back for the annex rehab. They include RIM Architects, Reid Middleton (structural engineer), Bear Wood Windows, Keystone Masonry, Danard Electric, D.L. Hendricksen (sheetrock),