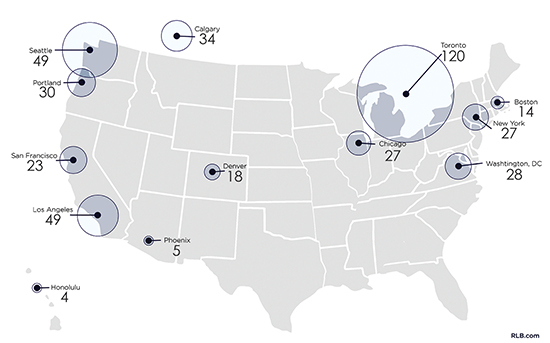 Image from RLB [enlarge]
The number of cranes at work in Seattle has dropped by 10 compared with six months ago, according to construction consultant Rider Levett Bucknall.

Seattle no longer holds the distinction of having the most cranes at work in the United States: the Emerald City has fallen into a tie with Los Angeles.

A preview of construction consultant Rider Levett Bucknall's semiannual Crane Index shows 49 cranes at work in Seattle, a drop of 10 from the last count, which was in January, and 16 fewer cranes than the record from mid-2018. The index tracks operating tower cranes in 13 major cities across the U.S. and Canada, providing a simplified snapshot of construction activity in each area. Since it's a snapshot, it can sometimes be skewed by projects that are just starting or finishing.

Emile le Roux, a principal at RLB's Seattle office, told the DJC a year ago that the local market appeared to be nearing a plateau.

RLB said it isn't releasing any more information about its index until the official report comes out on Wednesday. A map sent to the DJC yesterday by RLB shows Portland holding steady with 30 cranes, San Francisco dropping six cranes and LA picking up five cranes. Other major U.S. cities appear to be holding steady with their counts.

Toronto continues to be the busiest city in North American for construction, with 120 cranes — a jump of 16 over January's count, 23 over last July and a whopping 48 over the summer 2017 count.