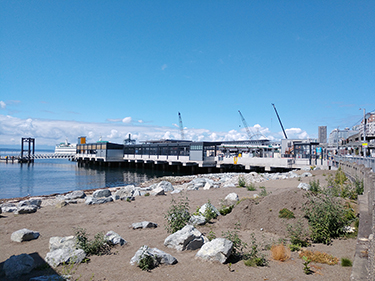 Photo by Benjamin Minnick [enlarge]
A beach for marine animals was built next to the new foot ferry terminal.

King County on Monday opened its new terminal for passenger ferries at Pier 50, on the south side of Colman Dock.

The terminal serves King County Water Taxi routes to Vashon Island and West Seattle, as well as Kitsap County Fast Ferry routes to Kingston and Bremerton. Those boats hold between 118 and 278 passengers, and Kitsap Fast Ferry's Kingston boat can hold 350 passengers with an additional crew member on board.

The terminal has a covered section where about 500 people can wait for their ferries. King County says the old facility left many passengers out in the elements. There also are ADA improvements, including a tactile path and tactile signs, an elevator to the new pedestrian bridge that connects to the under-construction Washington State Ferries terminal, and an ADA assistance station.

Monitors show passengers which of eight lanes to queue in for the four different foot ferry routes.

Total cost of the project is $45 million, which includes $35 million for the new building and dock, and $10 million for a float where two ferries can dock at once. About 80% of the funding came from a grant from the Federal Transit Administration.

Foot ferry riders were using a temporary facility at Pier 52 for the past two years. Later this summer, they will be able to use a new observation platform overlooking Elliott Bay in addition to the new facility.

Next year, Kitsap Fast Ferry is expected to expand service to Southworth, which will be served by one of two bow-loaders that are under construction. The other bow-loader will be used on the Kingston run. Both can haul 250 passengers.

The new facility is part of a larger project to renovate Colman Dock that is being built by the joint venture of Hoffman-Pacific.

The DJC reported last month that Washington State Ferries had $455 million in federal, state and local funding for the overall project, which replaces the dock's timber trestle with a concrete and steel trestle, constructs the new main terminal building, replaces the overhead loading facility on the northernmost slip, adds a bicycle entry and holding area, and builds stairs and elevators to connect with Alaskan Way.

The entire project is on schedule to open in early 2023.