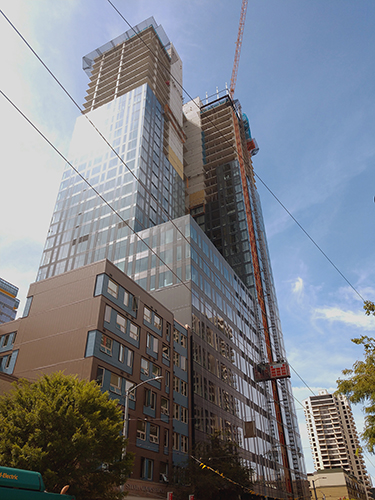 Photo by Benjamin Minnick [enlarge]
The top two floors of the 38-story concrete building will have steel-framed penthouses with tenant amenities.

Martin Selig is getting ready to top out his Third & Lenora tower in Belltown, at 2031 Third Ave.

Selig said the last concrete pour was earlier this month and the final piece of steel will be placed on Sept. 4. He said the concrete building is now 38 stories, up from 36, with the top two floors consisting of steel-framed penthouses containing tenant amenities.

The number of residential units has also increased, according to Selig, from 365 to 384. That's in addition to 176,500 square feet of office space, nearly 5,500 square feet of retail and five levels of underground parking for 221 cars. The entire project is nearly 700,000 gross square feet and will likely be finished in fall 2020.

WeWork and WeLive pre-leased the entire building before construction started. Selig said those New York City-based firms are in charge of subleasing the apartments and retail space. Other details were not available at press time.

Perkins and Will is the architect and KPFF Consulting Engineers is in charge of civil and structural designs.