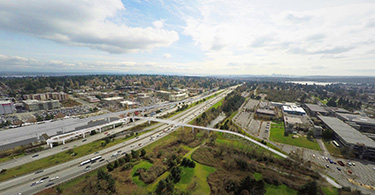 Images by VIA Architecture [enlarge]
The bridge will span I-5 to connect the future Northgate Link light rail station and Northgate Mall with North Seattle College. 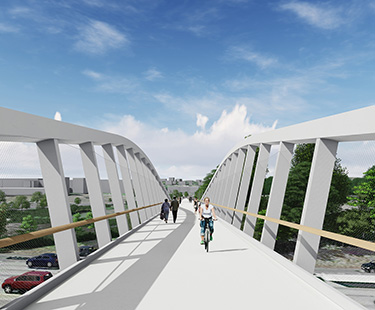 [enlarge]
Two steel spans will be used over I-5. Other parts will be made of concrete.

Seattle Department of Transportation officials got a bunch of high construction bids last spring for the Northgate pedestrian and bicycle bridge that will soar over Interstate 5.

They ended up rebidding the project and looking for ways to cut costs, since the four bids they received were over $30 million and the engineer's estimate was $22.5 million.

SDOT project manager Eric Strauch said they found a lighted handrail system in the original documents that was sourced from a sole supplier at a cost of $7 million-$8 million. Planners then revised the specification for the handrails with four or five suppliers and came up with a revised cost of $2 million.

The second round of bids were opened in June, with Granite Construction of Everett having the low bid of $27.35 million, followed by Walsh Group at $27.39 million and Kraemer North America at $27.5 million. When an additive of a protected bike lane on First Avenue Northeast was calculated, Kraemer slipped ahead of Granite by about $3,000 and won the contract, for $28.43 million.

Strauch said Walsh was the original low bidder for the second round, but an addition error made its bid higher.

The steel spans will be built off-site and trucked to the site for more work before installation. Placing them will require closing I-5 at night.

Strauch said fabrication of those two steel spans are the critical path in the project's schedule. SDOT hasn't met with Kraemer yet and therefore doesn't know the schedule, but the agency does want to have the bridge open by the time Sound Transit opens Northgate Station in August 2021. An industry source said construction could start this fall, pending permits.

Last fall, SDOT was projecting to start construction in the early months of this year and finish by late 2020. That was before the high bids came in.

VIA Architecture is the designer and TranTech Engineering is the construction manager.

Plain, Wisconsin-based Kraemer opened its Seattle branch last December in the Magnolia neighborhood. Its local projects include repairs to the Duwamish River Bridge for WSDOT and replacement of the bascule bridge over Salmon Bay in Ballard for BNSF Railway. Kraemer has been in business for over a century.