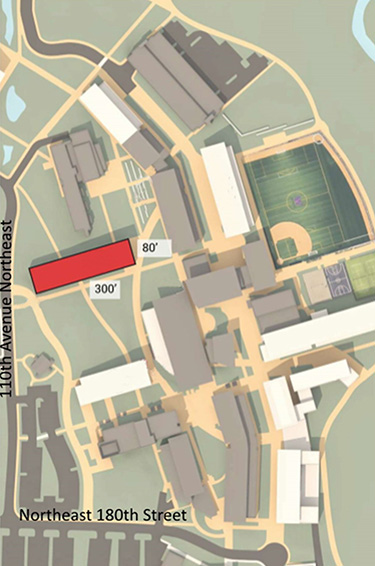 Image from Lease Crutcher Lewis [enlarge]
The 100,000-square-foot STEM 4 building is planned in the center of campus.

The project team working on the $79.4 million STEM 4 building on the University of Washington Bothell/Cascadia College campus will be able to earn additional incentives if it can add value to the project for the schools. Alternatively, it could lose its mark-up — or more — if it can't design and construct the project to meet the schools' needs and budget.

This risk-reward relationship is a key to the project's contract, which uses UW's integrated design-build approach.

The UW's first project to use integrated design-build is the Population Health building, which is under construction on the Seattle campus and expected to open next summer.

Brian Aske of Lease Crutcher Lewis, the design-builder on both projects, says Population Health is one of the quickest major projects that he has been involved with over his 26 years in construction. The project has a three-year development schedule, from site selection to occupancy.

Aske is education director at Lewis and president of the Northwest Region of the Design-Build Institute of America.

He says the UW's integrated design-build approach has elements of integrated project delivery, including a risk-reward team made up of people that have a major influence on the success of the project — the design-builder, architect, structural and civil engineers, MEP engineers and trades, landscape architect and others.

Aske says any firm with over 0.2% of contract value can be part of the risk-reward team. All on the team split the pie, but each is risking its mark-up.

For Population Health, Aske says the team has earned over half of the available incentives to date and will have a good chance to earn all of the incentives if the project continues on its path. The incentives here amount to 2% of the final target cost, which could be about $3 million for the team.

The UW also is reaping benefits for Population Health: So far the team has mitigated 74% of the potential risks on the project, allowing the school to put $8.8 million back into additional project enhancements and cut a year off the schedule versus a low-bid method. Finishing early gives the school another $11.5 million in buying power for things like labor and material costs.

Development of STEM 4 is in its early stages, with selection of an architect underway. Aske expects the UW/Cascadia/Lewis team to pick a designer in mid-December. He says there has been a lot of interest from architects.

Construction on STEM 4 is expected to start in spring 2021 and final design work will slightly overlap with that. The schools want the building to open in late 2022 and be about 100,000 square feet with classrooms, labs, offices and collaborative spaces.

Aske says design and construction costs of STEM 4 will be about $60 million.

Although the STEM 4 contract is being issued by the UW, it will be jointly managed by the UW and Cascadia. Lease Crutcher Lewis won the contract over two other shortlisted contractors: Mortenson Construction and Andersen Construction Co.

Lewis built the 75,000-square-foot STEM 3 building, now called Discovery Hall, in 2014 with Hacker Architects leading design. This project used the general contractor/construction manager format, with language in the contract emulating integrated project delivery, according to a 2015 article in the DJC quoting Steve Tatge, UW's director of major capital projects at the time.