7-story building collapses in Brazil; at least one dead 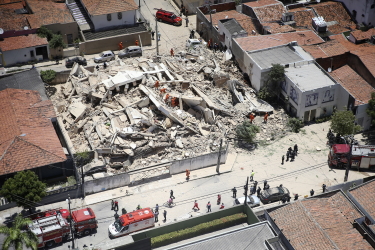 Photo by Jose Leomar/Diario do Nordeste via AP [enlarge]
The building was in an upscale part of Fortaleza.

RIO DE JANEIRO — A seven-story building collapsed Tuesday in an upscale part of the Brazilian city of Fortaleza, killing one person and leaving others trapped with some communicating with family members by cellphone from under debris, officials said.