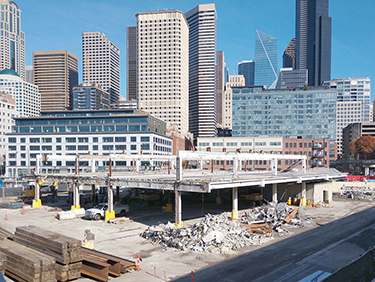 Nearly 75% of the old terminal building at Colman Dock is now a pile of debris and it all should be gone by mid-November.

Over the past few weeks, crews from Rhine Demolition of Tacoma have been tearing up the 53-year-old building using excavators equipped with jackhammers and demolition shears.

Removal of the 52,000-square-foot building will allow workers to remove aging creosote-coated timbers and the deck below the terminal building. This section will be replaced with environmentally friendly steel piles up to 150 feet long and a new concrete and steel trestle deck.

In-water work is limited to fish windows from mid-October to mid-February, during which crews are replacing 1,900 timber piles with 500 steel piles throughout the dock.

The work is part of a multi-year project to rebuild Colman Dock to make it more resistant to earthquakes and to modernize its functions. A joint venture of Hoffman-Pacific is leading the rebuild, which is funded by $455 million in federal, state and local sources. It is expected to be finished in 2023.

Over the summer, Hoffman-Pacific finished a new terminal for foot-passenger ferries on the south end of the site and built the first section of the new main terminal that serves the large ferries. The team also upgraded slip 1 and will finish improvements to slip 3 in mid-November. Slip 2 will be upgraded in future phases.

The first part of the new main terminal has a skybridge that connects to new elevators near the passenger-only ferry dock at Pier 50. Passenger-only ferries are operated by King County Water Taxi and Kitsap Fast Ferries.

Hoffman-Pacific is working on the northern part of Colman Dock, where the new main terminal will be perpendicular to the three main ferry slips.

The old terminal building was built in-line to the center slip, reaching to Alaskan Way from the waterfront. The new layout has the terminal building lengthwise along the waterfront, an elevated walkway where some of the old building stood in the middle of the site and a new oblong entry building paralleling Alaskan Way. The elevated walkway will connect the entry building and main terminal, link to a rebuilt Marion Street bridge and feed into the passenger-only ferry facility.