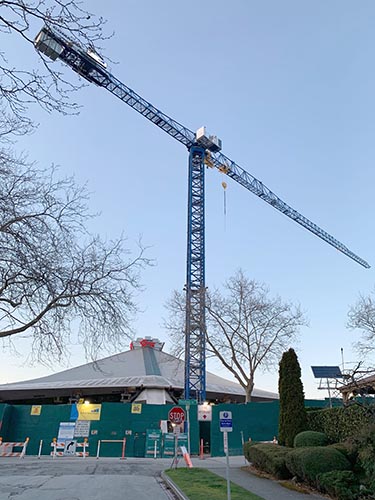 Photo by Brian Miller [enlarge]
A tower crane was installed about a week ago at the arena.

Mortenson crews were expected to resume construction today on the new arena at Seattle Center after some uncertainty last week about whether the project could continue amid the COVID-19 construction ban.

At the $930 million arena project, the general contractor halted construction on Thursday and Friday to throughly clean the site, plan future work and create an additional side entrance to help workers stay 6 feet apart.

Oak View Group's website for the project said: “We are living through an unprecedented situation which is affecting our community in many different ways. The safety and health of the project team, workforce, and community is our top priority and we are following guidance from the authorities leading the COVID-19 response.”

Gov. Inslee last week shut down most construction sites until at least April 6 in an effort to fight the virus. Exceptions were made for construction related to: essential activities; certain public projects; avoiding damage or unsafe conditions; or emergency repairs.

Oak View Group CEO Tim Leiweke told the Seattle Times last week that the project falls under the exceptions for public projects (that further a public purpose related to a public entity) and emergency repairs.

The project's landmark 44 million-pound roof has been held up by 72 temporary steel columns with cross beams since last fall and crews need to reattach the 20 original concrete Y-columns to a new foundation. Workers recently were reconnecting some of the footings in the northwest corner of the site. The temporary columns are expected to be removed over the next several months.

The arena is being gutted to allow for more seating and amenities for professional hockey games and other events. Included is a new bowl that extends 53 feet below ground, nearly doubling the size of the old arena. The roof had to be detached from its Y-columns for this operation.

“This is a delicate and precise undertaking,” said a spokesperson for NHL Seattle. “The roof is currently suspended through an intricate compression system and work needs to continue to reattach the roof to the structural concrete supports.”

NHL Seattle said the reworked arena should open in summer 2021.

NHL Seattle said construction on the future hockey team's headquarters and community facility at Northgate has stopped for the COVID-19 moratorium. That project is being built by BNBuilders.