Gantry cranes roll in next to SR 520 floating bridge 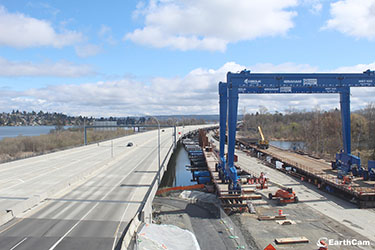 EarthCam image [enlarge]
The first pair of gantry cranes were erected about two weeks ago.

Two bright blue gantry cranes have appeared along the Seattle side of the state Route 520 bridge over Lake Washington.

Crews assembled them about two weeks ago as the first of two pairs of cranes that will be used to remove about 1.25 miles of old eastbound lanes between the floating bridge section and Montlake Boulevard. They stopped work last week due to the coronavirus-related work-from-home order from Gov. Jay Inslee.

When crews return from the two-week moratorium, they will continue building two trestles flanking the old roadway. The cranes will run along the trestles in pairs, working in tandem.

To remove the old bridge and roadway, crews will sawcut sections of the 1963 structure and lift them out with the cranes, which have an individual capacity of 100 tons. As the old sections are removed, the new bridge will be built in their place, in an assembly-line fashion.

The new bridge will have seismic isolation bearings on top of its columns to allow for movement of the columns while keeping the bridge deck stable during an earthquake. The existing bridge was built on hollow columns with no bearings.

American Bridge Co. is leading the gantry crane operation as a subcontractor to Graham Contracting. The cranes are 95 feet wide, 55 feet tall and their tires are nearly 6 feet tall. They were made in Italy by Cimolai.

A spokesman from the Washington State Department of Transportation said the bridge will be primarily built from above, which is a different method than Flatiron West used on the now-open westbound lanes. He said Graham's technique eliminates a lot of barges and a larger work trestle that were used on the westbound lanes. This will reduce required piles by more than 50% and be less impactful on neighbors.

The work is part of Graham's $455.3 million design-build contract to build the initial stage of the $1.64 billion Rest of the West project, which improves the freeway between the floating bridge and Interstate 5. As part of its contract, Graham will also build a new Montlake community-connecting lid and transit hub, a bike and pedestrian bridge over SR 520 and a new Montlake Boulevard interchange.

The spokesman said the new eastbound lanes should be finished in 2022. It's unknown if the construction moratorium will be expanded or how it will affect the schedule. Currently, the stay-at-home order runs until April 6.

Graham will also have to deal with an upcoming fish window that prevents in-water construction from April 15 to Oct. 1.

The new eastbound section will have two general purpose lanes and an HOV lane — an extra lane over the current configuration.