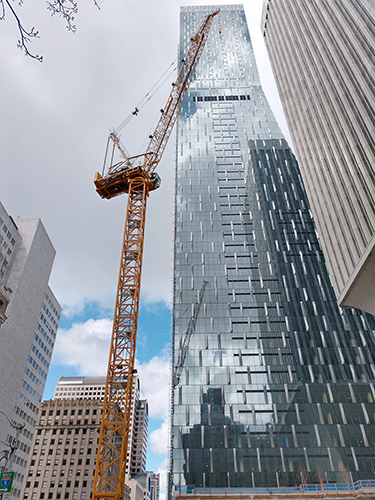 Photo by Benjamin Minnick [enlarge]
The tower crane at Rainier Square in Seattle sits idle while crews sit at home during the COVID-19 outbreak. 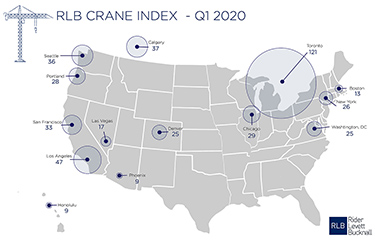 Image from RLB [enlarge]
Los Angeles for tower crane supremacy in the U.S.

The number of cranes at work in Seattle continues to dwindle, according to the latest semiannual Crane Index by construction consultant Rider Levett Bucknall. The index, covering the first quarter of this year, showed Seattle with 36 fixed cranes.

RLB says this is the third straight drop in the count for Seattle, which had mostly led the nation for years until it fell into a tie last summer with Los Angeles, both with 49 cranes at that time. Los Angeles now has 47 cranes, the most of the 12 U.S. cities surveyed for the index.

A report on the index from RLB said, “While Seattle's crane count takes a hard dive, with 13 fewer towers over the city, it still ranks among the top four North American cities surveyed in total cranes.”

Canada was home to the other two top cities; with 121 cranes in Toronto and 37 cranes in Calgary. Toronto has been a hotbed for construction for several years, with most cranes working on residential towers, followed by mixed-use buildings.

“Looking ahead, large-scale jobs are definitely not coming online at the rate seen in years past,” the report read.

“The recent drop in cranes can be attributed to a number of projects, which made up for many of the cranes in previous surveys, reaching completion. Despite this, there are a number of projects that remain in the pipeline for 2020 and 2021, which are anticipated to be a mix of commercial office and residential buildings,” it read.

Seattle peaked with 65 cranes in the summer 2018 count.

The latest count had 28 cranes at work in Portland, just two less than last summer.

RLB said mixed-use projects are declining in the Portland market, while commercial construction is climbing. The company said development is concentrated in downtown and Beaverton.

“Locally strained resources for labor and subcontractors is continuing to point towards a softening of the (Portland) market in the future,” it concluded.

RLB's outlook for all of North America has been downgraded.

“Given the significant impact that COVID-19 and the governmental mitigation measures that have been applied to contain it are having on the economy as a whole, it is probable that this pandemic will drive a recession which will have an impact on future crane counts,” it said. “Current construction projects may also be affected due to shut downs, or workers not reporting to job sites for a variety of reasons including illness, illness of family members, or even fear of taking public transport.”