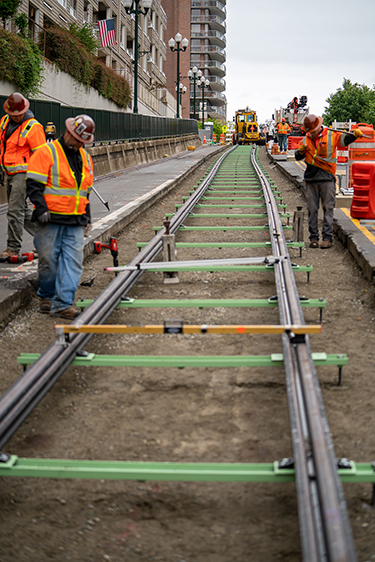 The agency on March 31 issued a stop work order for the project, just a few days before it announced it would suspend nearly all construction on its transit projects in the region due to COVID-19 risks.

The Hilltop project was shut down before Sound Transit's April 3 general mandate because Walsh Group, the general contractor building it, wasn't complying with new safety plans that account for the coronavirus, according to an agency spokesman.

The spokesman said Sound Transit had asked all of its contractors to put together safety plans to show how they would work under new guidelines from the CDC for construction. He said Walsh didn't have hand-washing stations in place at every work location along the 2.4-mile rail corridor and wasn't following a protocol to sanitize vehicles and equipment used by more than one person.

As part of the April 3 mandate, Sound Transit is continuing construction on “critical” elements of some projects. This would have included parts of the Hilltop project, such as track laying in the Stadium District and some utility work, but those pieces were halted under the stop-work order.

The Sound Transit spokesman said the track and utility work could restart before the rest of the Hilltop project, but didn't know when.

“Walsh is working with us to address (these) issues so critical work on the Hilltop Tacoma Link Extension can continue,” he wrote in an email.

The moratorium for all Sound Transit work started Monday and is set to end May 4, but could be shortened or extended.

It allows “limited work to continue on tasks considered critical and/or necessary to ensure that all sites remain safe and secure and/or to avoid mobility, environmental or other impacts” — but only with additional worker training and increased monitoring of updated safety plans.

The new rules include:

Sound Transit said it will immediately shut down jobsites where contractors are not complying with new safety rules, as was the case with the Hilltop project. It also is increasing oversight of active sites by reallocating safety inspectors and construction managers from closed sites.

Here are some examples of critical Sound Transit work that can continue:

• Street work in Tacoma's Stadium District that is disruptive to the public.

• Work on the Interstate 90 floating bridge.

• Certain sidewalks, ramps and driveways on the Eastside that are important for safe passage.

• Demolition of buildings along the Federal Way light rail alignment that would be unsafe if left standing.

• Fire protection systems in the I-90 Mount Baker Tunnel.

• Work at the Link Operations and Maintenance Facility East.