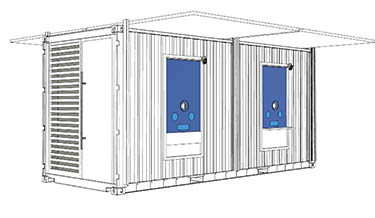 Images from PCL Construction document [enlarge]
Collapsible canopies double as shelter for people seeking testing and to protect the units during shipping. 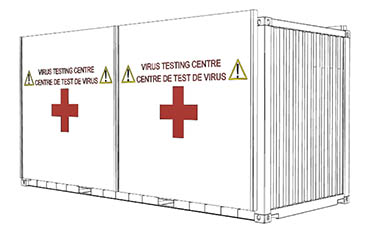 [enlarge]
The portable virus testing centers are made from Conex containers.

PCL Construction has partnered with health care experts, designers and engineers to create a portable virus testing center that can be quickly deployed across in the U.S. and potentially other countries.

PCL calls the box PVTC for short. They were developed from prefabricated Conex modular units — which are similar to ocean shipping containers but are often used to store construction materials — and can be used for walk-up or drive-thru applications to test for COVID-19 infections.

“PCL is extremely proud to be working with such great minds to develop a product that provides safe and accessible screening for businesses and their employees when we all come back to work,” said Ben Reinhardsen, manager of PCL's special projects division.

Reinhardsen said the units can be quickly turned around: about two to three weeks from purchase order to site installation. He said the cost varies depending on the end-user's needs, probably between $50,000 and $100,000.

The walk-up boxes have up to four stations inside that separate health care workers from those being tested outside. There are two windows on each site of the box, as well as two collapsible canopies on each side that double as shelter for people seeking testing and as protection when the box is shipped.

Modules have one swing door at the end for workers to enter and exit. Inside, there is a hand wash station, biohazard waste bin, metal shelving/cabinets, counters, a water cooler, electrical panel, a computer rack/communications panel and space for an optional battery. Hand sanitizer dispensers are found outside each window.

Drive-thru units are similar to the walk-up units, except there is only one window on each side.

PCL says the units can be equipped cameras for monitoring, screening and security, including thermal cameras to screen for fever. Other tech options include tablets at each station for text chat, occupancy sensors to estimate the line and relay that information on an app or the internet, and real-time language translation.

PCL has made a few units at its modular production plants in Houston and Toronto. Units sold in the U.S. would likely come from Houston. PCL could also bring its modular manufacturing plant in Bakersfield, California, into the equation.

The white paper lists a group of consultants on the project, all with offices in or near Toronto: PCL, Quasar Consulting Group, Loring Consulting Engineers, Stephenson Engineering, Parkin Architects, WZMH Architects, Camillion, and Microsoft.

Reinhardsen said Microsoft is working to figure out if artificial intelligence can be used to remove the human element from the PVTCs, for the safety of health care workers.

PCL's industrial division has made modular units in the past for the oil and gas industry. Reinhardsen said low oil and gas prices had the division looking out of the box for new ideas — in this case, reinventing the box with the PVTC.