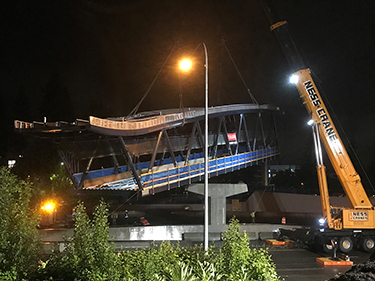 While most people were asleep at home late Saturday night and in the wee hours of Sunday, crews were busy placing the first half of a pedestrian/bicycle bridge over state Route 520 in Redmond.

The pedestrian bridge is part of the $3.7 billion East Link light rail extension project, which is 75% finished and expected to open in 2023.

The completed bridge will span about 240 feet over the highway and will be nearly 500 feet long with its approaches and ramps. It will connect the future Overlake Village Station to neighborhoods and businesses west of the highway, as well as a regional trail.

Overlake Village Station is under construction by the freeway and north of the Overlake Village park-and-ride on 152nd Avenue Northeast, according to Sound Transit's project website.

The new pedestrian bridge will have an art installation by local artist Leo Berk built of uniformly spaced aluminum louvers. The louvers will resemble solid walls when looking down the length of the bridge from either end, but as pedestrians or cyclists travel over the bridge, the images will seem to break apart as they pass the gaps between the louvers.

The bridge is funded and owned by the city of Redmond, which paid Sound Transit $19.88 million for design and construction of the bridge and a regional stormwater vault at Overlake Village Station. A Sound Transit document says the vault, to be located under a new plaza street, will support transit-oriented development in the area.

The bridge is part of Kiewit-Hoffman's $247.87 million E360 design-build contract, which includes the Overlake Village and Redmond Technology stations, a parking garage, 1.8 miles of light rail track and related work.

A second pedestrian bridge over SR 502 to the north, near Microsoft's campus, will connect to Redmond Technology Station. This bridge originally was part of the E360 contract, but was removed and Microsoft took over design and construction with agreements with the city of Redmond and the Washington State Department of Transportation. The city will operate the bridge after it's finished in early 2022.

Microsoft entered into an agreement in 2014 for its bridge with South Transit and the city of Redmond. The original design was for a simple prefabricated span that would have been 14 feet wide and 850 feet long. Two years later, Microsoft sought to stop that design so it could develop its own, which is much more significant at 50 feet wide and 1,150 feet long with architectural elements. The new design crosses the highway at an angle to better accommodate Microsoft's plan to refresh its Redmond campus.

Kiewit-Hoffman is also building Microsoft's bridge, but under a separate contract. So far, some columns have been installed but this bridge hasn't extended over the highway yet.

Most of the major infrastructure is complete for East Link. Various teams are completing track installation on the Interstate 90 floating bridge, finishing light rail stations, installing landscaping, and restoring roadways and public areas impacted by construction. Installation of power and control systems will begin in 2021, after civil construction is finished.

When East Link opens, it will have 14 miles of light rail track and 10 stations, with stops in Judkins Park in Seattle, on Mercer Island, in several parts of Bellevue and in Redmond. Riders will be able to travel from Overlake Village Station to the downtown Bellevue station in nine minutes; to Pioneer Square Station in Seattle in 30 minutes; and to Sea-Tac Airport in 62 minutes.