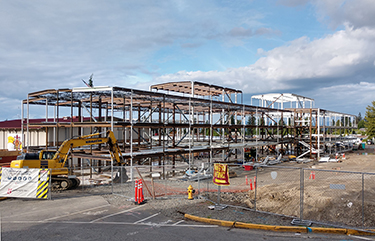 Cornerstone is working under a general contractor/construction manager contract from the Federal Way School District. The DJC reported two years ago that the construction budget was $104 million and the total project cost was $149 million. A district representative could not be reached for an update.

The existing 179,000-square-foot school was built in 1968 and is one of the district's oldest schools. The district has said it needs a bigger high school to accommodate growth in nearby elementary schools. It also said the open concept of the existing campus makes it difficult to secure.

An animated YouTube video by Bassetti Architects shows the school entrance no longer facing South 288th Street but turned to face a new parking lot to the west. There's also a terraced courtyard near the entrance and light-filled cafeteria portrayed in the video.

The district's project website says it is expected to open in fall 2021.

Students were attending school when construction got underway in December in the east parking lot but have been taking classes online since the COVID-19 outbreak. The plan was to build the new school with students occupying the old school, which would be demolished when the new one opens.

The project is funded by a $450 million bond passed in 2017 that also funds rebuilds of Totem and Illahee middle schools; and Mirror Lake, Star Lake, Lake Grove and Wildwood elementary schools.