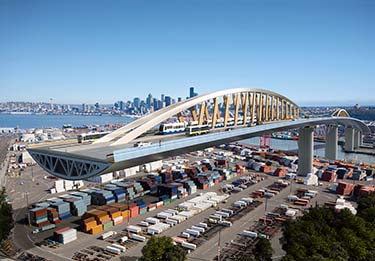 Images from B+H Architects [enlarge]
The long spans of the bridge would free up more space below. 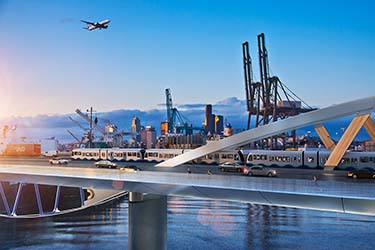 [enlarge]
Hangers made of wood with cores of steel or carbon fiber would support the bridge deck. Arches would transition into underslung steel girders.

German-American architect Matthias Olt has come up with an environmentally friendly option to replace the cracking high rise of the West Seattle Bridge: a hybrid made of mass timber combined with steel or carbon fiber.

Olt is taking a cue from similar — but smaller — bridges outside the U.S., including the Mistissini and Montmorency Forest bridges in Quebec City, and Sneek Bridge in the Netherlands. All of these bridges prominently display mass timber in their design.

Olt is Seattle office design director of Toronto-based B+H Architects. He has lived in the Seattle area for 20 years but grew up in Germany, where he first learned about mass timber.

Olt said he doesn’t know of any hybrid mass timber bridges in the U.S., but noted this country used heavy timber to build many railroad bridges in the past.

Mass timber is laminated wood that is glued together for strength.

“The time is right for this in Seattle,” he said.

Over the last 2.5 months, B+H has developed a replacement concept for the West Seattle Bridge with help from engineering firms SMEC and Robert Bird Group. All three of the companies part of the Surbana Jurong Group of Singapore.

The hybrid replacement would reuse the bridge’s existing concrete foundation and piers. It is a conventional arch bridge with its main compression arches made of steel plates, but the hangers that suspend the bridge deck from those arches would be made of a wood-steel composite or wood-carbon fiber composite.

Olt said tensile forces in the hangers would be carried by the steel or carbon fiber. The wood comes into play to absorb momentary periodic compression forces caused by loading from heavy trucks, high winds, earthquakes and other asymmetrical forces. He said wood can handle great loads parallel to its grain.

The wood hangers would be 5 feet wide and 18 inches thick with a steel or carbon fiber core. The mass timber part of the hangers would range from 28 to 50 feet long, and the end grains would be capped with steel to prevent water and moisture from getting into the wood. Steel connectors would extend 2.5 feet from the bottom of the wood hangers to the bridge deck and 3 feet from the tops to the arches.

Olt said wood in the hangers would be treated with a moisture protection system that is environmentally friendly to protect the Duwamish River below.

The replacement bridge includes sections of underslung steel girders made of stainless steel or carbon fiber.

Olt said materials for the hybrid bridge would cost more than traditional concrete or steel, but the bridge itself would be cost competitive because a lot of it would be prefabricated and assembled in a factory, speeding up site construction.

He said it’s too early to tell how much faster a hybrid West Seattle Bridge could be built, but prefabrication can shave four to six months off construction of a typical cast-in-place concrete bridge that might take 36 months to build.

Another benefit Olt cites is the hybrid bridge would have long spans, eliminating some supports below and freeing up space for other uses. It also would have a lifespan of over 100 years vs. 50-75 years for a concrete bridge.

A concept-design packet submitted last week to the city from B+H lists these benefits in using mass timber for the replacement bridge:

• Its light weight maximizes the ability to reuse the existing foundation.

• Visible components can be easily monitored and replaced over time.

• Puts Seattle on the map for using renewable resources. 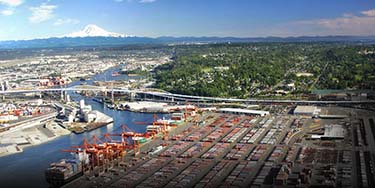 [enlarge]
The replacement bridge would have three sets of steel plate arches.

Olt said the bridge would be accessible for bikers and pedestrians, and half of it could be designated as a high-rise park in a decade if the long-term shift from individual cars to mass transit and other transportation modes continues.

Olt said the hybrid bridge is perfect for Seattle, a city that values sustainability and manufacturing technology. There are also two mass timber plants operating in the state: one in Spokane run by Katerra and other in Colville run by Vaagen Timbers.

The B+H team is seeking support for the hybrid bridge from a number of sources, including technology companies, politicians, carbon fiber and mass timber manufacturers, and the community.

Olt said there are 50,000-60,000 concrete post-tensioned bridges built across the U.S. since WWII that are nearing the end of their lives. He said the mass timber model is an opportunity to rethink how infrastructure is replaced.

“Trees and wood, that’s the only renewable material out there,” he said.