BNSF pivots on Ballard Bridge; no replacement — just a lot of fixing 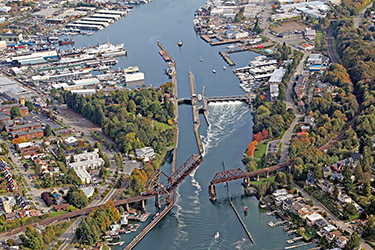 Two years ago, BNSF Railway said it was going to spend $200 million to replace its bascule bridge over Salmon Bay in Ballard with a vertical lift span. A spokeswoman at the time said they wanted to avoid a failure like the bridge experienced in 1948, when its concrete counterweight block cracked, fracturing a steel girder.

Now the railroad operator says it will forego the replacement bridge and instead conduct “heavy maintenance” on the existing bridge, which was built around 1913. That move could save it $50 million-$100 million over the cost of a new bridge.

BNSF said it has spent millions over the years to extend the life of the bridge, however frequent openings have taken a toll on the counterweight system, which is starting to fail. The span is lowered 30 to 40 times a day for freight, Amtrak and Sounder trains. It typically is up so that marine traffic can pass below.

An update provided by BNSF said, “We originally looked at replacing the entire structure, but following input from the maritime industry, community and other stakeholders, we have made the decision to alter our course. Based on expert analysis and review, BNSF has developed a heavy maintenance strategy to replace both the trunnion bearings that allow the counterweight to rotate and the steel and concrete that account for most of the counterweight.”

BNSF said the bridge is in good condition, with the exception of the counterweight system. This maintenance work, it said, will address the bridge's needs while having the lowest environmental and community impact. It also means the look of the bridge, which has a single-leaf through-truss with overhead counterweight, will not substantially change.

The project is in the preliminary design phase, and BNSF said it anticipates submitting permit applications to the appropriate agencies in the “near future.” Construction will take up to three years.

Jacobs is working as a consultant to BNSF on this project.