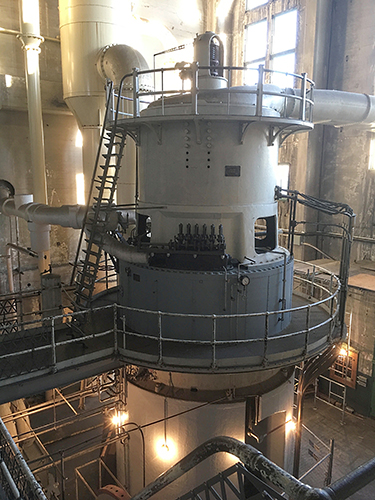 Photo by Sam Farrazaino [enlarge]
Historical equipment, such as this vertical steam turbine, will be part of the reworked space.

It's not every day that a construction company gets to work on a century-old building — even rarer if the building houses the few remaining vertical steam turbines left in place in the U.S.

That prize is now up for grabs, as Equinox Development Unlimited is seeking a general contractor/construction manager to help renovate the historic Georgetown Steam Plant at 6605 13th Ave. S., next to Boeing Field. Statements of qualifications are due Nov. 13.

Sam Farrazaino, president of the nonprofit Georgetown Steam Plant Community Development Authority, said the plan is to turn the 30,000-square-foot building into a museum, arts and sciences education facility, event venue and community center. The CDA was formed last year to reactivate the steam plant for its new life.

Farrazaino said the GC/CM will initially help define the budget, which now has a rough estimate of $15 million-$20 million. He said the contractor will be brought on early to advise and collaborate on design and constructibility, as well as to provide construction scheduling.

A preconstruction/project definition contract will be negotiated as one of the first tasks. The preconstruction phase is expected to take six months.

Since the building's exterior and interior are both landmarked, “character defining” elements will be preserved, including the turbines, boilers and other equipment. Substantial alternations will be made for seismic, life safety and systems improvements. Farrazaino said this could include new interior and exterior stairs, an elevator, fire sprinklers and ADA access.

A new visitor center could be built near the plant's front entrance, and a new classroom and covered outdoor space and gathering structure could be developed in the south lawn area. An existing portable classroom could be replaced with a comfort station.

Farrazaino said the largest areas that could be redeveloped into event and educational spaces are the rectangular boiler room and the corresponding ash room below it.

Farrazaino, who also leads Equinox, said a selection committee on Nov. 20 will shortlist up to five general contractors, who will make presentations on Dec. 1. The committee on Dec. 4 will pick a winner.

Equinox is negotiating with Seattle City Light for a 55-year lease on the building. Farrazaino said they hope to get that in front of the City Council in December for approval.

The CDA is starting to put together a community advisory committee that will help it with project visioning and creating a CDA board. This board will build the organization that will run the museum and events space in the future. Farrazaino said Equinox will be a steward until the development is self-sufficient.

Farrazaino is an artist and former general contractor who is now a developer and property manager. He started Equinox in 2006 to partner with public and private entities to create and preserve affordable arts and culture spaces, such as Inscape, which turned the former INS Building into workspace for artists. Another project Equinox operates is 100,000 square feet of workspace used by about 130 artists just blocks from the steam plant. Equinox also is part of a group that is acquiring land in Georgetown to build affordable housing.

Farrazaino said construction of the Georgetown plant's foundations started in 1906, then the San Francisco earthquake hit and that resulted in the project team changing the plant's design from unreinforced masonry to reinforced concrete. The plant started generating electricity in early 1908 for Seattle Electric Co. with two steam turbines; a third, horizontal, unit was added a decade later.

Initially, electricity from the plant was used to power the electric streetcars that ran between Everett and Tacoma. Later it was used as a backup power source, with its last electrical production coming in 1977. Current owner Seattle City Light used it for storage afterwards and most recently held once-a-month guided tours and special events until the building was closed for installation of a new roof.