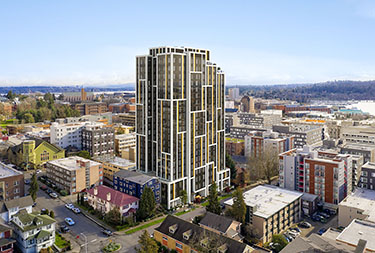 Rendering provided by Weber Thompson [enlarge]
Lakeview is targeting students who want to live close to the University of Washington.

The approximately $145 million project is expected to open in September 2022, according to press materials from the developer. It will have 226 units with 597 beds. The apartment floor plans are one-, two-, three- and four-bedrooms.

Weber Thompson is the architect, landscape architect and interior designer on the project, which will be about a block from the U District Station, where light rail service is slated to begin next year.

Exxel Pacific is the general contractor. Other on the team are Rushing, KPFF Consulting Engineers, Hart Crowser, Morrison Hershfield and A3 Acoustics. (Editor's note: This story has been updated to add the contractor)

The development is targeting students who want to live close to the University of Washington. Its amenities will include fitness spaces, indoor and outdoor study and lounge spaces, landscaped decks on levels 3, 20 and 21, hot tubs, a rock-climbing wall and outdoor theater-like large screen televisions.

The developer said the apartments and amenities will have views of Lake Union, the Olympics and Mount Rainier.

The building will be near the Burke-Gilman Trail. It will have 192 bicycle stalls, but no parking or retail space.

In a press release, Aaron Keeler, senior director of development at Greystar, said Greystar is proud to have Lakeview as its third project in Washington and Oregon since spring of 2020. Besides Lakeview, the projects are Arista, a 236-apartment community in Seattle’s University Village; and Union on Broadway, a 357-apartment student housing community near the University of Oregon in Eugene.

“(Lakeview) is one of the first residential towers in the U District which will provide housing close to campus, an area which has been historically undersupplied — we are very hopeful that future residents will appreciate the very short walk to campus,” Keeler said.

Weber Thompson said it was designed to fit into an evolving neighborhood without a strong established style. The building design references volcanic stone formations in the nearby Cascade mountains and aims to be evocative while not overwhelming the senses, the architect said.

Four three-story apartment buildings were demolished to make way for Lakeview. However, Greystar preserved the century-old Villa Camini apartments (now a city of Seattle landmark) which is part of the properties it paid $19.6 million for recently for Lakeview. The development rights of the seven-unit Mediterranean Revival-style building were transferred to the tower.

Greystar’s Pacific Northwest development team has offices in Seattle and in Portland.