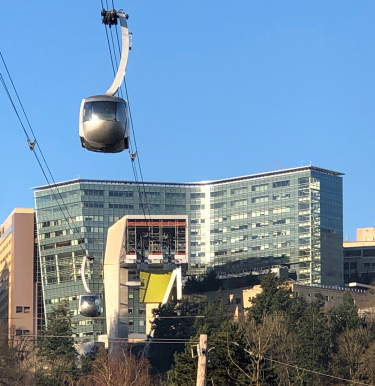 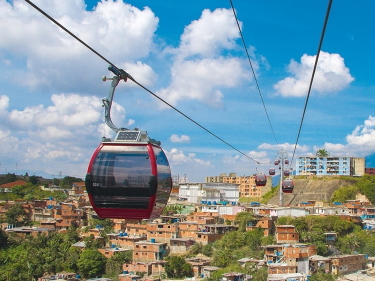 Image courtesy of SkyLink [enlarge]
Gondola systems are gaining popularity around the world as alternatives to ground transit.

A group of West Seattle residents has a transit solution that goes above and beyond.

Gliding over a three-mile stretch between Sound Transit's SoDo station and Alaska Junction in West Seattle, a group calling itself SkyLink envisions an urban gondola.

“We're trying to figure out how to connect West Seattle with the rest of Seattle – sooner than later,” said Martin Pagel, a member of the SkyLink proposal group. “It's important to have a transit alternative independent of the road network, which gets clogged up for various reasons.”

The most recent cause of heavy traffic between West Seattle and downtown is the closure of the West Seattle Bridge until mid-2022, due to emergency repairs for cracking in the bridge.

The closure of the bridge has added a considerable burden to West Seattle residents commuting downtown, as they navigate alternative routes, Pagel said. Although the Covid-19 pandemic has reduced the number of commuters to and from downtown, he said the pandemic has meant a budget shortfall for Sound Transit and the delay of extending light rail to West Seattle.

These factors, according to Pagel, tilt the discussion toward the more novel solution of a gondola.

“With the bridge down and a budget crunch, this might require out-of-the-box thinking for Sound Transit,” he said. “They should take another look at aerial options. It might save them money and allow Sound Transit to deliver the project on time.”

Sound Transit recently said that the link extension to West Seattle will be delayed until 2031, due to the budget effects of Covid-19.

“Sound Transit evaluated multiple technologies, including gondolas, for implementing high-capacity transit,” said Rachelle Cunningham, public information officer with Sound Transit. “Through that process, light rail was determined to be the most appropriate mode.”

Sound Transit is working on a draft environmental impact statement for the West Seattle link.

For his part, Pagel said he and members of Skylink will be lobbying Sound Transit board members this winter and spring to reconsider the gondola idea. “We are starting to engage with them,” he said.

The urban gondola has come a long way in the last decade. Steven Dale, a principal with SCJ Alliance, which provides consulting for gondola projects around the world, said gondolas can overcome challenges that other transit systems cannot.

“Gondolas are clearly going to be useful in situations where there are clear topographical challenges – rivers, steep elevation changes and bodies of water are natural candidates,” said Dale. “But man-made, built-form topography is also ideal. Congested roads, highways and parklands can also benefit. There are generally few situations where cable cars cannot be viable transit modal alternatives.”

The aerial transit concept has been embraced in Portland for more than a decade. The $57 million Portland Aerial Tram connects the South Waterfront neighborhood to Marquam Hill and provides a link for Oregon Health & Science University physicians and staff, as well as the public, to shuttle up and down Marquam Hill above traffic.

The half-mile tram moves thousands of passengers each day and has exceeded early ridership estimates.

Dale, whose firm has worked on a gondola project in Oakland, said gondolas are well-suited for city environments.

“There has been sustained year-over-year growth in the cable car industry outside of the traditional ski resort markets for the last decade,” said Dale. “This is demonstrably clear — particularly in the Latin American market. While evidence on reasons for this are anecdotal, one could generally attribute the recent growth to the successful implementation of public transit gondolas in major urban centers around the world, coupled with information-sharing platforms like YouTube and our own website http://www.gondolaproject.com.”

Gondolas and trams, he said, “are mainly one-off solutions to particular circumstances. Aerial trams are usually stand-alone projects that are a little hard to work into an overall transit solution, as they tend to be pretty short routes that require transfer to other modes.”

The SkyLink proposal has potential because it could be built quickly, he said. “I love the way West Seattle is thinking laterally to solve the issue faster and cheaper,” said Bell.

And while some trams, such as Portland's, contend with objections from residents whose homes are below the structure, SkyLink might not be as problematic.

“Elevated transit also has a very different relationship with the private spaces inside buildings,” Bell said, referring to the effect trams and gondolas have on residential neighborhoods. “The West Seattle example has some advantage in this regard, as it is often industrial neighbors the route would pass by.”

At a time when Sound Transit is feeling the crunch of lower revenues due to the pandemic, Pagel said SkyLink is more compelling than ever.

“Skylink will take one-tenth the cost light rail in terms of building and running the system,” he said. “It could save Sound Transit a billion dollars or two, and that's what they need now.”