In January 2016, the GLY team presented its proposal to Overlake Medical Center for the construction of Project FutureCare, Overlake’s $250 million, five-year, phased campus renewal project. Knowing the project was about more than bricks and mortar to its client of nearly 30 years, GLY’s proposal centered on a list of six questions. If the questions could consistently and continuously be answered “yes,” that meant important promises to the community were being kept, and Overlake’s vision to provide world-class health care close to home achieved.

• Are we minimizing operational disruption while maintaining the highest level of safety for the Overlake community — patients, staff, visitors, everyone?

• Are we maintaining safe drop-off and walk-in access to the emergency department?

• Are we maintaining safe and easy-to-find vehicle access in and out of the South Tower parking garage?

• Is the site presentation organized and welcoming, and are GLY field directors in the proper location to help the Overlake community if help is needed?

• Is there a clear sense of wayfinding upon arrival to, and departure from, the Overlake campus?

• Can we safely and efficiently manage traffic integration and circulation across the campus?

With the cornerstone of the project — the 240,000-square-foot new East Tower — now complete, and about 25% of the overall scope left to go, the Yes Set paired with the team’s suite of communication tools and processes supported successful delivery of a major health care project.

ALL EYES ON THE HOT SPOTS 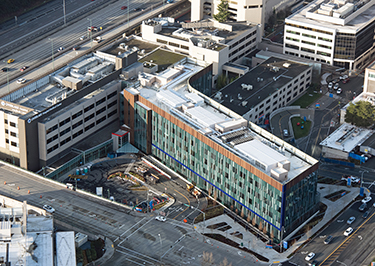 Minimizing operational disruption while maintaining safety was not only top of the Yes Set, it was also a critical factor in developing phasing plans. As the preconstruction effort progressed, GLY focused on how to build what was being designed. It settled on five major phases and drew up a map of hot spots for Overlake executives.

A hot spot was defined as any potential moment of operational risk or patient dissatisfaction. Regular discussions about these locations allowed the GLY team to gather feedback and make thorough preparations in advance of activities in those areas. It also armed Overlake leadership with the knowledge they needed to communicate with and empower others working in and around the hot spots: this work is necessary and here’s why; here’s what you can expect to experience and for how long; here’s how we can all prepare for no surprises.

PREPARING FOR A NON-EVENT

At the project level, GLY field supervisors sat down with Overlake’s engineering team, infection prevention specialists and construction management team twice weekly to review upcoming work. Anything that impacted hospital staff or patients was communicated with a detailed plan and narrative. Stakeholders and associated contractors signed off on the work plan, and it was routed to hospital staff.

Similarly, tasks that involved critical hospital infrastructure required a shutdown request noting date, time, impacted systems and procedures to conduct the work. The goal for shutdowns was to plan everything so thoroughly and accurately that it essentially became a “non-event.”

During the project’s first phase, sensitive MRI and CT equipment were relocated by installing all required power and glycol lines to new locations prior to the scheduled shutdown. This reduced the overall down time and limited critical liquid helium bleed-off in the imaging department. In total, the FutureCare project team successfully executed 92 shutdowns, authored 92 work plans and completed 28 access requests.

The Hospital Consumer Assessment of Healthcare Providers and Systems survey was introduced in 2006, began publishing in 2008, and since 2012 has played a pivotal role in hospital reimbursement. Low scores can both hinder a provider’s reputation and limit the funding it receives. So it was no easy decision during Phase 2 of the project to temporarily relocate the emergency department entrance — Overlake’s front door — to the first (underground) level of the South Tower parking garage. With the tower crane now on-site and overhead, deep shoring walls adjacent, and a significantly reduced arrival area, relocating the ED drop-off solved the operational disruption and impact that the growing construction footprint could have had on the ED. Still, how would patients and staff respond to such a major shift?

GLY’s virtual design and construction specialists collaborated with designer NBBJ to model how it would look and function, like a valet ED system versus curbside drop-off. Upon entering the garage, security staff would quickly radio the ED so that attending staff were ready and waiting to transport a patient into the hospital. To put their idea to the test, GLY and hospital staff staged multiple scenarios and filmed their drive times into the garage before everyone agreed to the concept.

In the end, patient satisfaction numbers did not suffer — they went up — confirming that patient experience and service remain some of Overlake’s key differentiators.

The exponential evolution of technology has meant live communication is possible no matter where construction occurs. BIM360, tower crane camera capture, and drone image capture all allow live, remote access to the Project FutureCare jobsite. At Overlake’s South Tower, which now ties into the new East Tower, the elevators open into the lobby to offer spectacular mountain views. When construction phasing called for a solid temporary wall, the GLY team built a virtual mock-up to communicate how two windows could be inserted without compromising the protection offered by the wall.

Although the new East Tower is the most notable addition to the campus, FutureCare has three phases left before the Yes Set is tucked away until a version of it may be needed again. An expanded behavioral health unit moves to the top floor of the West Tower, where it continues to offer the only hospital-based inpatient mental health treatment program on the Eastside. Next, GLY demolishes the old East Tower and the two existing structures that comprised the original 1960s layout.

The final phase, scheduled for completion in 2022, involves construction of a connecting corridor between the new East Tower and existing main entrance, becoming Overlake Medical Center’s new front door. With a concourse-style drop-off and pedestrian-friendly pathways and wayfinding, the reconfigured campus will welcome patients and visitors from the Sound Transit Wilburton Station, two blocks away.

From childbirth services to surgery to mental health, Project FutureCare is Overlake’s investment in the growing Eastside community, and a “yes” to enhancing the work of its medical providers and continuing to provide an exceptional patient experience.

Jon Friedrichsen is a senior project manager at GLY and has been involved in Project FutureCare from day one.