Katerra finds it's not easy to become the Tesla of prefab, mass timber construction 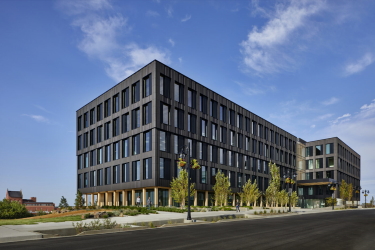 Is Katerra the next Tesla?

The startup construction company, founded in 2015 in Menlo Park, California, vowed to revolutionize the industry through an aggressive growth strategy, offering a wide range of in-house design services and manufacturing many of the products that go into its prefab construction.

But by 2019 — a year when the construction industry was reaping the benefits of a strong economy, low interest rates and boom in new development — Katerra was aiming just to break even. That year, Katerra opened a 270,000-square-foot mass timber factory in Spokane — the largest, single-use CLT facility in North America.

By 2020, Katerra announced it was taking cost-cutting measures, including reducing staff numbers by more than 7%.

This year, Katerra is staying afloat through a recent $200 million cash infusion from the SoftBank Vision Fund and a commitment to “refocusing” the company, according to new CEO Paul Kibsgaard.

Kibsgaard explained in a December 2020 press release that Katerra “became overcommitted and spread itself too thin,” while “growing numerous businesses in parallel — ultimately more than we could fully develop and maintain all at once within this very capital-intensive industry.”

Like Tesla, Katerra burst onto the scene with high hopes and the promise that technology could redefine an industry. The company claimed in its marketing campaign to be “on a mission to transform construction through innovation of process and technology.”

In its first few years, Katerra found that the Silicon Valley approach to revolutionizing a highly competitive industry through technology and rapid expansion is difficult and expensive. Welcome to the big leagues.

With the $200 million SoftBank infusion, Katerra now has 16 offices in North America, including two in the Northwest.

The company recently announced the hiring of Kris Beason as head of construction in the Northwest. Beason will be responsible for overseeing project delivery in Washington, Oregon and Idaho.

“Our central focus in the Northwest over the past few years has been multifamily housing, completing more than 24,000 multifamily units to date,” said Beason. “We believe that the pandemic will continue to drive migration to suburbs, and we expect to see increasing demand for suburban garden-style walk-up multifamily communities.”

In addition to mass timber commercial projects, including the Catalyst building in Spokane, Beason said Katerra is at the forefront of the use of mass timber in multifamily design and construction with recent projects in Washington, Oregon and Colorado.

“Katerra's state-of-the-art, 270,000-square-foot mass timber manufacturing facility, which features one of the largest CLT presses currently in operation globally, is helping to scale the production of mass timber in the U.S. so the material can be more broadly adopted across the construction industry,” Beason said.

“The factory leverages automation and manufacturing innovation to optimize production speed, efficiency and quality, while remaining a low-cost provider of mass timber. Specifically, we have the capacity to manufacture more than 6.5 million cubic feet annually, allowing us to dramatically scale the production of CLT in North America and drive growth across the industry,” she said.

She foresees growth in sustainable design and construction and believes programs such as LEED will flourish.

“I've seen firsthand that investing in sustainability programs is often seen as costly, but tends to normalize after several successful implementations,” she said.

“A key driver of innovation in construction centers on supporting the aging workforce,” she said. “Off-site construction in the form of panelized and mass timber solutions are essential to helping shore up the labor gap and improve efficiencies in the industry. Prefabrication also offers the added bonus of supporting sustainable building practices.”

And while Katerra has had growing pains, Beason said the company maintains its focus of merging technology with construction.

“Although there isn't one silver bullet,” Beason said, “Katerra is taking a holistic approach and believes technology must be deployed wherever possible to move the needle on sustainable building.”