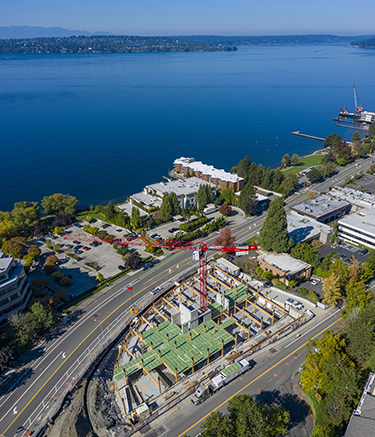 Photos by Adam Hunter/LMN Architects [enlarge]
The building has a two-story profile to protect views of Lake Washington. 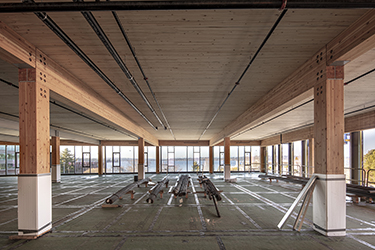 The first mass timber building in Kirkland is expected to be finished this summer near the Carillon Point waterfront.

Called the Lakeview Office Building, 46,000-square-foot structure is about 75% complete on a 1.11-acre triangular lot at 5501 Lakeview Drive. Its mass timber components include dowel-laminated timber (DLT) panels and glulam posts and beams. The exterior has a wall of operable windows curving along Lake Washington Boulevard Northeast to the west and south, and textured punched windows and metal panels on the north and east facades.

Inside, mass timber is on full display.

“Mass timber construction has the potential to revolutionize the construction industry by combining the tradition of wood construction, craftsmanship, sustainable materials, and technological innovation,” said LMN associate Jeremy Schoenfeld in a news release. “It is exciting to see this project come together as an example of all the benefits mass timber provides, and to help create a new sense of place along the waterfront in Kirkland.”

LMN designed the building with a low-rise profile — just two stories above grade — to help preserve neighbors' westerly views of Lake Washington and the Olympic Mountains, and to match the civic scale of the neighborhood. Building tenants can take in those views from two first-floor outdoor spaces and a roof-top common room with a deck and landscaping. The eastern section of the deck and the building's main entry will have what LMN describes as “immersive shade elements and fern gully that is dappled with seasonal highlights, specialty wall systems and an integrated water feature.” The western section will have the views and a green space.

LMN says the living roof, rain gardens and terraces will mitigate water run-off, and the design of those elements was inspired by local forested hillsides and verdant lake edges.

The building also will have two levels of underground parking for 157 cars in a concrete garage. For non-motorized commuters, there will be lockers, showers and parking for 32 bikes.

According to LMN, the use of DLT reduces the project's embodied carbon by replacing steel or concrete. The prefabricated timbers also shorten construction, with an estimated erection time of six weeks for the wood superstructure.

Sierra Construction is the general contractor, and StructureCraft fabricated and installed the mass timber. Sierra crews are now finishing the exterior envelope, roof deck and site work, as well as interior elements.

Abbotsford, B.C.-based StructureCraft is the same company that supplied and installed mass timber for the $51 million Idaho Central Credit Union Arena that will open this fall at the University of Idaho. That project was profiled last fall in the DJC.

StructureCraft's website says DLT can be used for floor, wall and roof structures. It says DLT panels can be built faster in the factory than cross-laminated timber and glue-laminated timber because the process doesn't involve glue or press curing time.

Gerald Epp Jr., business development engineer at StructureCraft, said in the news release: “With the resurgence of this ‘old' material in modern commercial buildings, mass timber is gaining attention in the construction industry and demonstrating the efficiency and beauty of exposed structure. The large, prefabricated elements act as a kit-of-parts and connect together very rapidly on site, with minimal disruption, noise or waste — neighbors enjoy watching these buildings go up.”

No prospective tenants have been announced.

The DJC reported in late 2019 that the project's ownership is somewhat opaque. Mt Baker Holdings LLC acquired the property under a different name in 2002 for $4 million. It's governed by a trust whose officers, based at Carillon Point, often represent family trusts and investments associated with Bill Gates.