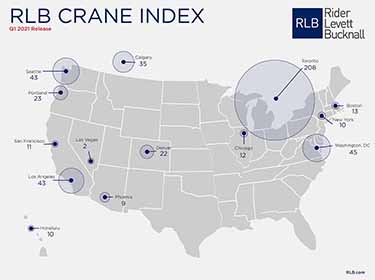 Image from RLB [enlarge]
Seattle didn’t add any cranes from the last count, but seven other cities did.

Rider Levett Bucknall yesterday released a sneak peek of its crane index for the first quarter of 2021 — and it shows Seattle is no longer the top city in the United States with tower cranes at work.

Seattle didn't gain any cranes, but Los Angeles added two, putting the cities into a tie for second place (each with 43). Perhaps the biggest surprise was that Washington, D.C., added seven cranes and leapfrogged into first place, with 45 units.

In a report, RLB said the residential sector still accounts for most of the cranes in Seattle. “Dozens of new projects are initiating construction, while others are nearing completion, ensuring a balanced construction forecast,” the report read, also noting a significant amount of transit work underway north of Seattle.

The last count, covering the third quarter of 2020, placed Seattle as the top crane city in the nation. At the time, RLB said work here had resumed on a large number of residential projects that were put on hold during the pandemic-caused shutdown earlier in 2020. But, the consultant also had forecast a slowdown for the Seattle construction market.

RLB said the Washington, D.C., market is being fueled by an increase in cranes in the North Capitol Street neighborhood, while residential and health care projects have picked up in the NoMa, Union Market and Georgetown areas.

Back on the West Coast, Portland saw a drop of four cranes, to a total of 23. RLB said the Rose City's count remains stable despite several large hospitality projects finishing. It said cranes are concentrated in the downtown area; and mixed-use, residential and commercial sectors are “seeing an impressive boom in the region.”

The largest drop in cranes came in San Francisco, which lost 13 cranes, to a total of just 11. RLB attributed that to completion of several apartment and condo projects along the Market Street and Van Ness corridors, and infill projects in the South of Market neighborhood.

Toronto continued to dominate the North American market — with 208 cranes — up a whopping 84 cranes over last period. RLB said there were 20,000 condo units started in 2020, accounting for most of the cranes. It also noted a big jump in commercial and mixed-use projects that have been slated for the past few years and were not impacted by the pandemic-caused economic slowdown. However, RLB said the pandemic has contributed to a reduction in people moving to the Toronto area, and that will likely lower demand for new housing. This could lead to a near-term drop in condo construction starts and a shift toward permanent remote working, which may lessen the demand for office space.

The crane index tracks the number of operating tower cranes in 14 major cities across the U.S. and Canada. Overall, RLB counted 71 more cranes than in the last report.

“We have seen tower cranes installed at residential and mixed-use projects increase to 69% of the overall count,” the report read. “The commercial sector has also seen an aggressive increase since our previous count.”

RLB is an international property and construction consultant.