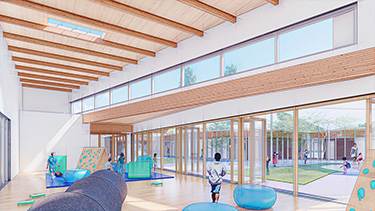 Images by Mithun courtesy of UW [enlarge]
The renovated center will have larger and more flexible indoor and outdoor play and community spaces. 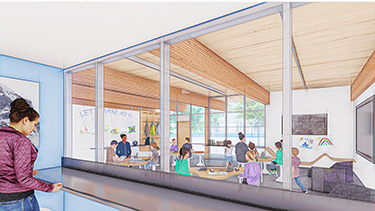 [enlarge]
There will be larger observation spaces and restructured classroom layouts.

The Haring Center for Inclusive Education, tucked away between the University of Washington Medical Center and the Montlake Cut, is about to get a major renovation, thanks to a $30 million donation from the Sunderland Foundation. The 42,000-square-foot building is at 1981 N.E. Columbia Road.

According to a recent UW news release, the gift will fund substantial improvements to the half-century-old building so that it meets current code requirements and achieves LEED gold. The plan is to replace or reinforce foundations, shear walls, beams, headers and columns, as well as replace the roof and electrical, heating and other systems. Total project cost is $34 million, with the UW funding the remaining amount.

The UW posted a design-build team solicitation notice in today's DJC, with team qualifications due May 13. A school official indicated the team should be on board within 90 days. Seattle architect Mithun led the pre-design phase.

The news release says Haring Center's heating system works sporadically and there is no cooling system. It lists other challenges as poor internet access, outdated classroom and research space, and limited access for people with disabilities. It says tiny offices no longer meet the need of a collaborative work environment, and small observation rooms don't work for educators and parents.

“When buildings were built 50 years ago, we did work differently,” said Ilene Schwartz, Haring Center faculty director, in the release. “This will not only improve the quality of the classrooms to make sure that they're safe and accessible and state-of-the-art, it will also improve the workspace for our professional development teams and our research teams.”

UW says daily experiences for children and families will be improved, too, with better access at pickup and drop-off, restructured classroom layouts, and more opportunities for movement in larger and more flexible indoor and outdoor play and community spaces. There also will be enlarged observation spaces and expanded community space.

Construction is scheduled to begin later this year and take about two years to complete. The building will close during the rehab and the UW is looking at other sites for the students during construction.

Since 1964, Haring Center has provided special education and early learning for children and youth with neurodevelopmental disorders and other disabilities. It's home to UW's Experimental Education Unit, a school serving children from birth to kindergarten, teaching kids of all abilities, including those who fall on the autism spectrum and other families not served in mainstream education. The UW says researchers at Haring Center develop cutting-edge techniques that are shared with other educators around the world.

The donation was spearheaded by Bill Sunderland and his wife, Alyssa. All three of their children attended the Experimental Education Unit.

Sunderland is on the board of Kansas-based Sunderland Foundation, which provides grants for construction and special interest projects that help nonprofits. The foundation was formed in 1945 by Lester T. Sunderland, who was president of Ash Grove Cement Co. for 33 years.

Grants are focused on communities where Ash Grove operates, including Washington, Oregon and Idaho. In 2019, the foundation awarded over $150 million in grants, with over $7 million of that for Washington projects. The $30 million donation to the UW is one of the largest that the foundation has made.