Mortenson construction cost index increases at its highest level ever 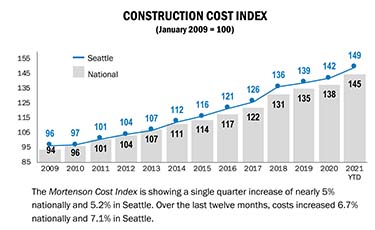 Graphic from Mortenson [enlarge]
The cost of construction in Seattle has outpaced the nation since 2014.

Significant disruptions to the supply chain for construction materials and cost increases in commodities have propelled the Mortenson construction cost index to its largest single quarter increase since it was first published in 2009.

The report said raw material shortages and manufacturing issues have contributed to the jumps in building material prices over the past two years.

Vern Jones, chief estimator at Mortenson's local office in Bellevue, said the only construction material that decreased in price for the latest quarter was resilient flooring, which includes carpet, vinyl and tile but not hardwoods.

The report said supply chain disruptions could moderate throughout the year as capacity returns to pre-pandemic levels.

Jones said he doesn't see an oversupply of materials in the immediate future, as demand for materials is not going down. “It will take a long time to get caught up,” he said about mills and other production facilities getting back to capacity.

The report also said the current upward pressure on materials prices is somewhat offset by a competitive market with subcontractors working to fill their capacity.

Jones said Seattle was a booming region and subcontractors were more selective prior to the pandemic. Then the pandemic hit and jobs were put on hold and some canceled. “A lot of that went away when the coronavirus hit,” he said, adding that Mortenson is now seeing good subcontractor participation on jobs.

Jones said future price volatility can be tempered by getting subcontractors on board early. For example, a steel subcontractor could place an order with a mill early on to lock in the price of steel.

The report offered this advice to building owners: “As markets rebound with increased private and government spending, the industry may see additional upward pressure on pricing. We continue to monitor this somewhat unpredictable market and know that a resilient, agile approach to projects will be necessary in the months to come.”

Jones said owners with projects in for permits will be ahead of the game.

Mortenson has been fortunate that not many of its projects have been put on hold. Jones attributed that to several projects keyed to community needs, such as hospitals and colleges, and a few others that “have been through the valley and are starting to come out on the other side.” Also, Mortenson's project base hasn't been too heavy on multifamily, office and hospitality — all weak sectors in the pandemic economy.

In Seattle, Mortenson expects to finish work in October on both the $1 billion Climate Pledge Arena project and the 216-room citizenM hotel in Pioneer Square. It also is building a 283-room Marriott-flagged hotel in South Lake Union for Stanford Hotels and a $5 million softball training complex at the University of Washington. Projects in the pipeline that haven't yet started include a $125 million ambulatory surgery center and garage for Kaiser Permanente in Everett, a $51 million learning resource center at Everett Community College, and a $50 million computer, science and engineering building at Western Washington University.

Mortenson builds its quarterly index by pricing out the cost of a typical four-story, 150,000-square-foot office building after surveying local suppliers. It's the sort of building that represents an “average” project for Mortenson company-wide.