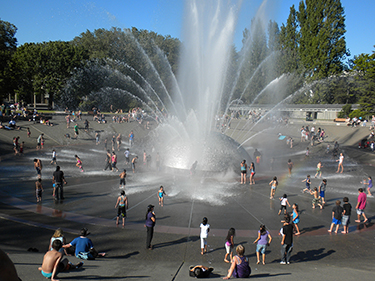 Photo from Seattle Center [enlarge]
Seattle Center will replace 56 of the fountain’s 274 water nozzles. Lighting will be switched to LEDs.

While the $1 billion redo of the former KeyArena has been grabbing the headlines, two smaller projects have quietly got underway at Seattle Center: a rehab of International Fountain and construction of a new skate park to replace the one that was removed to make way for a new entrance plaza to the reworked arena.

Forma Construction Co. is working on the $300,000 renovation of International Fountain, which is expected to wrap up in late June. That project is replacing 56 existing light fixtures with color LED fixtures and 56 micro-shooter water nozzles, as well as installing a new panel and anemometer that control all of the fountain's 274 nozzles and music.

Other work includes changing power from AC to DC and re-caulking the entire 220-foot-diameter bowl to prevent moisture from undermining the pavement. Crews so far have installed 4,000 of the 5,000 linear feet of caulk needed for the bowl.

WET Design is leading the design team. WET also was the designer of a 1995 rebuild of the fountain that made it more user friendly. Other team members are Alpha and Omega Electric, Compass Plumbing & Drain Services and JMS Masonry Restoration.

The fountain was built in 1961 for the 1962 Seattle World's Fair. In addition to the 56 micro-shooters, it has 137 mist nozzles, 77 fleur-de-lis shooters and four super shooters that can spray water 120 feet in the air. The nozzles are mounted in a 27-foot-wide dome that stands 10 feet tall.

Crews from Grindline Skate Parks are building the new skate park at the Broad Street right of way between Fifth and Taylor avenues North. This section of road across the street from Seattle Center was closed to traffic in 2014.

VDZ+A and New Line Skateparks designed the new park for street-style skateboarding, with a focus on providing flexible space for beginners to practice.

Grindline was awarded a $1.86 million contract last year for the new park, besting two other bidders for the job. The park will have above ground skateable elements, seating, vegetation, street trees, green stormwater management and gathering spaces. There also will be “upper plaza” skating terrain built with cast-in-place concrete and shotcrete.

Seattle Center's website says the skate plaza will be divided into two skate spaces that will be connected by a sidewalk because the site contains a public alley. The two sides could be connected in the future, if new development makes it possible to close the alley.

A spokeswoman for Seattle Center said they want to have the skate park finished this summer.

Seattle Center is making other improvements on its campus that are expected to be finished by October, when the arena reopens as Climate Pledge Arena. Included are a $1.2 million renovation of DuPen Fountain into an interactive spray plaza, replacing ground-level signs with digital signs, improvements to the Northwest Courtyard near KEXP, and renovations to the monorail stations. Climate Pledge Arena is planning to install several new outdoor art pieces, which will give the Seattle Center campus 50 total outdoor art works.

Bids for DuPen Fountain are due May 19.

The spokeswoman said they hope to have some events return to Seattle Center this summer and resume a full schedule by October.