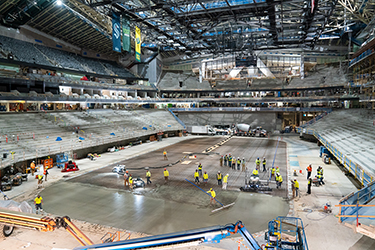 Photo from Seattle Kraken [enlarge]
A crew of experts worked to make sure the rink conforms to NHL specifications.

A milestone was reached on Friday inside Climate Pledge Arena, where crews poured the concrete slab that will support the ice for the Seattle Kraken hockey team.

The construction team led by general contractor Mortenson poured about 400 cubic yards of concrete from over 40 ready-mix trucks to create the slab, which has rounded corners (28-foot radii) to meet NHL standards. The foundation for the 200-foot-long by 85-foot-wide slab started April 12, when crews poured a smaller concrete slab to define the rink's perimeter and shape. A sand base and warming floor were installed atop the first slab.

The warming floor prevents heaving and provides consistency for the ice floor. It also helps prevent the coolant in the 13 miles of piping in the top slab from freezing.

The piping system has many bends in it, requiring about 1,800 welds that were made using the computer-assisted “orbital” method.

“What's extra cool on this building ... the ice is going to be formed from water that is collected on the roof,” said Ken Johnsen, construction executive with Oak View Group, in a video. “So, the Seattle Kraken is going to be skating on Seattle rain. How cool is that?”

CAA Icon is the owner's representative for Oak View Group.

Construction at Climate Pledge Arena continues on schedule for an October opening. The Seattle Times on Monday reported that the cost of the project is now expected to reach $1.15 billion, which includes $75 million for an adjacent private parking garage and $25 million for signage and other improvements around Seattle Center. That's up from about $1 billion.

Seattle Kraken officials are getting ready for the NHL expansion draft on July 21, followed by the team's first game in the fall.