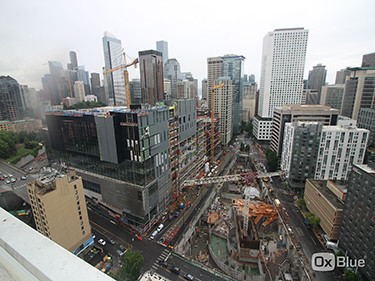 Photo courtesy Oxblue and Clark/Lewis [enlarge]
The addition is going up on the site of the former Convention Place Station/bus layover lot. 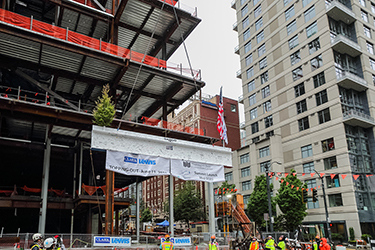 Photo by Tim Rice [enlarge]
The final steel beam was hoisted on Friday.

Construction crews on Friday lifted the final steel beam into place for the $1.9 billion Summit building addition to the Washington State Convention Center in downtown Seattle. The signed beam was part of a topping out ceremony that was held virtually due to the pandemic.

“This is an exciting day that is dedicated to the people who made this project a reality,” said WSCC board chair Frank Finneran in a prepared statement released yesterday. “The past year has tested us, but the construction crews are innovators and problem solvers. They have kept going and kept safe while advancing this transformative project.”

Since breaking ground in 2018, crews have erected 21,000 tons of steel for the 1.4 million-square-foot addition at Boren Avenue and Howell Street.

As part of this project, WSCC is investing over $93 million into community improvements and has committed about $135 million to contracting with nearly 100 minorityâ€ or womenâ€owned businesses. Included are new sidewalks, lighting and landscaping designed to activate four city blocks.

WSCC says the new space will double the capacity of the existing convention center. In the five years prior to the start of construction, the facility had to turn away as much business as it booked due to space or schedule constraints, according to WSCC. There are already 33 conventions booked for Summit through 2027.

The addition is expected to pump about $260 million yearly into the local economy through visitor spending and another $19 million in sales taxes.

The existing convention center, now called Arch, is a block south of the Summit jobsite. It has about 400,000 square feet, including several additions since it was built in 1988.