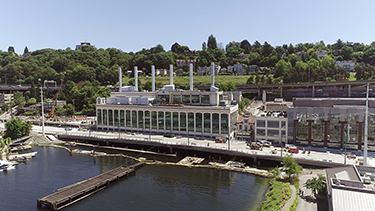 The Seattle Department of Transportation on Sunday will reopen the Fairview Avenue North bridge following a 20-month closure and $52 million replacement project. It's located between South Lake Union and Eastlake near the historic Lake Union Steam Plant.

An SDOT news release says the old span was built in 1948 and was the city's last wooden bridge supporting a public road. SDOT closed it in September 2019 for demolition and replacement due to its poor condition: timber posts holding up the western half were decaying and the concrete girders stabilizing the eastern half were cracked. It also didn't meet modern seismic safety standards.

DJC records indicate that Orion Marine Group of Tacoma was awarded a $24.9 million contract in early 2019 for the work. An initial round of bidding in late 2018 saw SDOT reject all nine bids. Orion then submitted one of the three rebids. The engineer's estimate was $21 million-$24 million.

The old bridge was about 57 feet wide while the new bridge is 65 feet wide. This expanded width allows for a second sidewalk, so that both sides of the bridge have sidewalks, and expands the former 9-foot-wide bike/pedestrian lane to 12 feet for two-way biking. Three lookout platforms were added to the 540-foot-long bridge and the floating walkway below the west side of the bridge was restored. The new platforms replace the old lookout area at the north end of the bridge.

SDOT says it will continue working on improvements in the area, including replacing a traffic circle at Yale Avenue North and Aloha Street with a permanently raised intersection, and building a new traffic signal at Aloha and Eastlake Avenue East. It says this work was not possible while the bridge was closed because these streets were carrying detour traffic.

The new bridge will be part of the future route of King County Metro's Rapid Ride J bus line that will connect downtown with Belltown, South Lake Union, Eastlake and the University District. The bus line is under design, with construction expected to start in early 2023 and service beginning in 2026.

Funding for the new bridge includes $27 million from the Levy to Move Seattle passed by voters in 2015. Other funds are from the city's bridge seismic retrofit program and the Washington State Department of Transportation Local Bridge Program.

SDOT will hold an opening ceremony on Saturday morning, allowing walkers, bikers and rollers to use the span before opening to traffic.

SDOT has retrofitted 32 of its 124 bridges over the past 30 years and plans to complete nine more seismic retrofit projects by 2025.