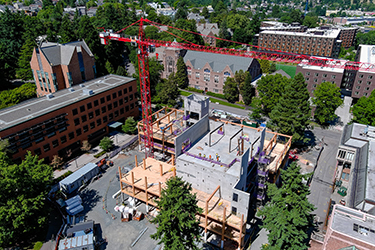 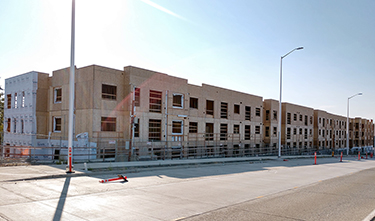 Photo by Benjamin Minnick [enlarge]
Workers two months ago left the Alexan Gateway apartment project on Kent’s West Hill. They have yet to return.

Katerra's June bankruptcy filing left a few local projects in the lurch. It's unclear just how many projects were affected, but two stand out: Founders Hall at the University of Washington and Trammell Crow Residential's Alexan Gateway apartment complex in Kent.

News of Katerra's predicament hit many by surprise. Hoffman Construction scrambled to find a new supplier for the cross-laminated timber panels that are a key element of the 85,000-square-foot Founders Hall. For that job, Katerra was designing, fabricating and installing the CLT panels.

Hoffman project manager Bob Vincent said Katerra left when the project was at the third of its five floors. He said personnel from Hoffman's Structures division took over installation of the panels. The crew was able to finish the fourth floor and frame up the fifth before running out of CLT panels.

“We did the best we could to keep everything going,” Vincent said, adding that Hoffman crews adapted quickly when tasked with panel installation.

Hoffman is now using Canada-based Structurlam as its CLT panel supplier, with the first delivery expected next week. In the Pacific Northwest, Structurlam has an office in Portland. It supplied the CLT canopies for the Eastside Community Center in Tacoma and CLT beams for the Carbon12 condo project in Portland.

With the new panels, Hoffman will finish Founders Hall's fifth floor and roof, which will also be made from CLT.

Vincent said the project will be finished sometime in 2022. It was on track for early 2022 before Katerra left. It's unknown if the schedule was impacted.

“I'm excited to see it all complete here, it's a beautiful building,” Vincent said.

Things are much quieter about 20 miles to the south, where workers two months ago left Alexan Gateway's 6.5-acre jobsite at 23000 Military Road S. A chain-link fence surrounds the complex, which consists of three four-story buildings that will one day contain about 285 apartment units. The buildings apparently were topped out, but were left with exposed wood and openings for doors and windows unfilled. Tyvek wrap can be seen on a small part of the north end of the development, some of it beginning to peel.

A grade-and-fill permit filed with the city of Kent listed Katerra Construction and Katerra Architecture.

A planner with the city said Trammell Crow is looking for a general contractor to replace Katerra. He said the city is still conducting regular site inspections to make sure no squatters are in the buildings or temporary businesses have popped up. The city will also inspect the jobsite when construction resumes.

Mark Hoyt, Seattle area managing director for Dallas-based Trammell Crow Residential, said they hope to restart as soon as possible and will finish the project. He declined to elaborate further.

Trammell Crow developed another Alexan project with Katerra, this one called Alexan Highlands, which recently opened at 1150 10th Ave. N.E. in Issaquah. Katerra's website says of the 135-unit apartment project: “Katerra's construction services team is delivering this project with increased efficiency through the innovative use of panelized systems and technology-enabled onsite coordination.”

Katerra announced in early June that it filed for Chapter 11 bankruptcy and would proceed with certain active projects in a number of states. It also filed a WARN notice with the state showing it planned to permanently lay off 117 workers in the Seattle area.