Exploring the benefits of mass timber

In recent years, the process of evaluating mass timber has changed. What once began with individual advocates pitching mass timber as a project-specific option is now beginning with clients and owners. More focused on environmentally responsible builds, and more familiar with available materials, it’s exciting to see entire project teams seeking out mass timber.

Seattle Public Schools is one such client. In February, the board of directors voted unanimously to transition the district to 100% clean and renewable energy by 2040. The district, which is known for its ongoing campaign to reduce waste, water and energy use across the district, has a goal of “creating schools that encourage a culture of conservation and environmentally responsible behaviors by combining learning with sustainability.”

The vote and the prescribed goals are encouraging evidence of the direction the built environment is headed, especially in the education market.

This vision is evident at the university level, too. Teams are pursuing sustainable builds, evaluating alternative materials, construction practices, and environmental impacts. And mass timber is showing up in more and more of the region’s campus designs.

Good intentions and a vision for mass timber aren’t enough. The challenge clients and design teams face now is how do we make mass timber stick? What does it take to make mass timber succeed on a project — especially one in the education market, where roadblocks of budgets, schedules and public sector complications threaten its inclusion?

So often, mass timber is dropped from a project in the early phases. We’re proud of our mass timber execution rate, our success at making mass timber not only something talked about in a project’s conceptual phase, but something alive in projects all over the region. 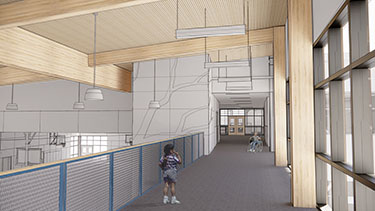 We’ve shared keys to successful mass timber projects — things like ensuring the entire team is on board, getting stakeholders to the table as early as possible, choosing the right contractor and communicating well — but beyond these basics, what else does it take to not only get mass timber into a project, but keep it?

To exemplify what these recommendations look like in the implementation of a project, we’ve pulled two case studies: Van Asselt School addition and new Renton Elementary School No. 16.

Both projects feature mass timber prominently. And both are code alternates — requiring exceptional agility, creativity and know-how from the teams. Each provided wonderful learning opportunities for the whole team and revealed keys to getting mass timber across the finish line.

The right team will not only be able to think outside the box to create unique designs, but will guide the code-alternate process, working with everyone from the design team to stakeholders, district officials and city officials.

The groundwork for mass timber was laid, but the largest departure from code and standard practices was utilizing the floor and roof cross-laminated timber (CLT) as the seismic diaphragm. This unique system demanded proprietary connectors which are concealed and specifically engineered for mass timber projects. Through a pre-application meeting with the Seattle Department of Construction & Inspections, we permitted these systems and components successfully into the project.

At Renton Elementary School No. 16, we were breaking new ground. Our team took on the role of educators and mass timber advocates, gaining the trust of the jurisdiction and sharing presentations, success stories and data.

Establishing this collaborative relationship between city and design team made mass timber a possibility for the new school and we were able to ensure equivalency with the minimum standards of the building code.

A true understanding of the material (and its manufacturers) makes all the difference. It’s a prerequisite to navigating the bid process, guiding the team, and ultimately, creating efficient (and on-budget!) mass timber designs.

The Van Asselt School addition is a success story and example of optimization. With the full team at the table from the very beginning, we were able to look at conceptual designs, timelines, framing options and building form, ultimately designing a mass timber structure that was not only beautiful, but highly efficient. A best-case scenario for mass timber design, the material (CLT panels and glulam beam spans) came first, and the building form followed.

Renton Elementary School No. 16’s design is full of dramatic roof slopes, complexities and changing levels, so we created options that supported the architectural vision and allowed mass timber to be integrated to the greatest extent possible. This meant thoughtfully selecting locations for exposed mass timber, remaining respectful of the budget and building complexities.

Additionally, instead of designing for a custom panel, costs were kept under control by selecting a “universal” panel size and working within its confines. Leveraging a network of trusted mass timber manufacturers yields competitive, accurate bids.

Van Asselt Elementary School finds ultimate efficiency in the floor plan. The building form, influenced by the panels, was designed with the material top-of-mind. This is how we always hope mass timber designs will take shape!

One of the top reasons mass timber regularly gets dropped is because of price. The school’s structural designs leverage Coughlin Porter Lundeen’s mass timber expertise, utilizing products at their full efficiency. The preselected universal products are used in strategic ways and panels are maximized at full spans, resulting in less overall materials, customizations and cost.

In contrast, the final design of Renton Elementary School No. 16 proves that teams can achieve an efficient mass timber system in a building that wasn’t necessarily designed for mass timber and panel efficiency. Since the program was resolved and the layout was approved before Coughlin Porter Lundeen joined the team, we had to be creative in our engineering and carefully evaluate if mass timber could fit into the set budget and layout.

The structural floor system is an impressive project standout and exemplifies efficient structural design. The final layout ditches the normal positioning of columns and beams thanks to the classrooms’ unique framing layout. As a traditional layout with its corresponding seven-ply panels would have priced mass timber out of the project, the team opted for a plan that cut down the panel span and utilizes the more universal five-ply panel. These decks and their cantilevered panels resulted in a thinner floor system, reduced spans and economized use of CLT panels.

It’s an exciting time for mass timber. And an exciting time for us as its stewards. We look forward to seeing projects continue to leverage this material, witness the social and environmental impacts, and be a part of this new category of builds in the education sector and beyond.

Jason Whitney is a structural project manager at Coughlin Porter Lundeen and proponent of mass timber.