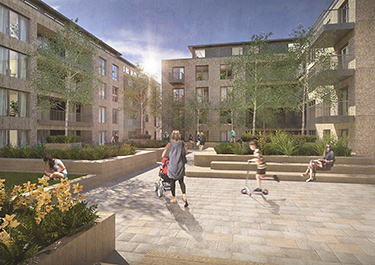 Images from Modulous [enlarge]
Modulous used its technology to create this concept for a U.K.-based multifamily project. 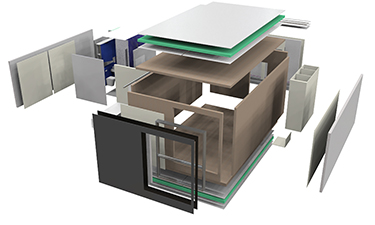 The Modulous kit-of-parts is a series of standardized sub-assemblies that enable rapid assembly without a dedicated factory.

London-based construction technology firm Modulous is expanding to the U.S. and has picked Seattle as its starting point. The company says it's reinventing the construction industry with its digitized design and kit-of-parts platform geared to the midrise multifamily housing market.

Janet Stephenson is leading the charge as regional managing director of U.S. operations, based in Pioneer Square. Stephenson comes from Katerra, where she led sales for the West region before heading building platform sales for the launch of Katerra's Garden Multifamily Building Platform. Prior to joining Katerra in 2017, Stephenson worked at a number of firms, including Sellen Construction, and was a building advisor to the city of Seattle. She has 23 years of AEC experience.

Mast is U.S. operations director, based in the Phoenix area. She spent 3.5 years at Katerra, most recently overseeing construction optimization for the Garden Multifamily Building Platform.

Caldwell is U.S. design director. She was director of architecture at Katerra for four years, leading execution of prefabricated products from feasibility through construction completion. She has over 13 years of experience, specializing in multifamily and senior independent living projects.

Talbot is U.S. product director. She spent 3.5 years at Katerra, most recently as director of product design. She has over 15 years of experience working in complex, mixed-use architecture and in development strategy.

Both Caldwell and Talbot worked at Seattle architecture firm Hewitt prior to joining Katerra.

Modulous says it has a preferred supplier network in addition to its digital design platform and kit-of-parts, which simplifies and accelerates multifamily development. It's different from Katerra in that it doesn't need factories to produce its kits — instead it digitizes design, costing, scheduling and procurement to enable its partners to deliver modular assemblies in facilities near the jobsite.

Katerra touted its technology-driven, off-site construction that often used mass timber in its projects. The company filed for bankruptcy in June.

Stephenson said the Modulous kits use readily available parts and are not complex, in terms of assembly. She said the system was created in the U.K. using operations and procedures recognized by that country's real estate industry.

Modulous CEO and co-founder Chris Bone said digitization is the key. He said the process allows a developer to make a feasibility decision much quicker, at the very earliest stages of a project. He said digitization allows a project to reach 70% design very quickly and achieve 99.3% cost accuracy early on. “We know costs very accurately and we also know scheduling,” he said.

Modulous has three big partners to fuel its supply chain: Houston-based Crane Worldwide Logistics, Knauf of Germany and Mexican building materials giant Cemex, which is also an investor in Modulous. Bone said Crane will collect components from the supply chain and send them to local assemblers. Crane has 1 million square feet of storage in California and 140,000 square feet locally in Kent.

Bone said Cemex has operations along the West Coast, although the company's website shows the closest facilities are near Sacramento, California, and Reno, Nevada. No operations are shown in the Pacific Northwest. Bone said they will procure materials locally when possible.

Bone said no projects have been lined up in the Pacific Northwest and they're still getting pieces in place. He said they hope to start their first job here by mid-2022.

In addition to Washington, Modulous also will focus on the California market. Stephenson said both California and Washington need housing and can benefit from the Modulous system to counter the high cost of labor in the two states.

Bone said the California market is similar in size to that of the entire U.K.'s, and the company's work in the U.S. could quickly pass that in the U.K. He said the product is geared to midrise apartment buildings, especially senior housing and student dorms.

In the U.K., Modulous' first project is through the design phase and the company is working with a local assembler. There are other projects in various stages of early development in London, Manchester and Bristol. Bone said those projects are three to six stories tall and will provide affordable apartments.

Bone said their market is four- to eight-story buildings, but they could go up to 12 stories. He said they have been asked if they could reach 25 stories, but it's too early to determine if that's possible.

The fledgling company has raised about $11 million to date, with Blackhorn Ventures of Colorado as its largest contributor.

Philip O'Connor, managing partner and co-founder of Blackhorn, said the Modulous team is exceptional and the product is highly scalable. “We invested in Modulous because we believe this model easily translates to the U.S.,” he said.

Blackhorn invests in companies that use technology to create unprecedented resource productivity, accord to the company's website.