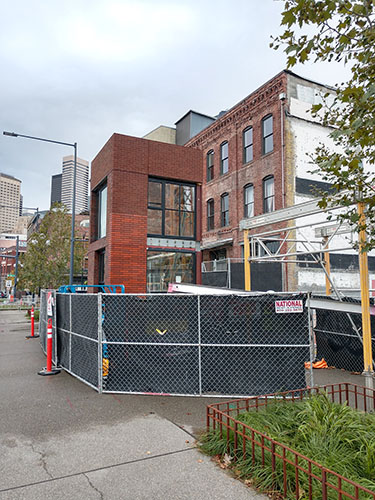 Photos by Benjamin Minnick [enlarge]
The visual mock-up is flanked by an 1890 industrial building at 304 Alaskan Way. The Jack will be built with a window wall system that will mimic the windows of the surrounding historic buildings. 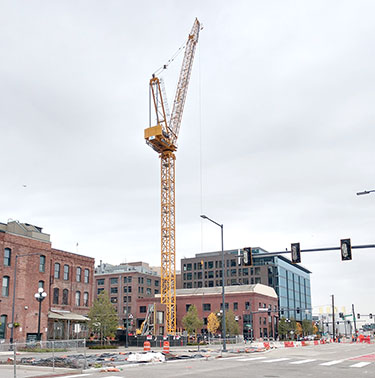 The tower crane isn't the only thing rising at The Jack jobsite along Alaskan Way South — JTM Construction is building a two-story “visual mock-up” of what the future office building's facade will look like. The rest of the project, officially at 74 S. Jackson St., is mostly a hole at this point.

The Jack mock-up is about 90% complete on the site's northwest corner, which borders Alaskan Way. Coffman said it still needs some metal trim installed. Meanwhile, crews finished installing the project's tower crane on Saturday and are now focusing on the building's concrete foundation.

Coffman said the project for developer Urban Visions will be a high end, boutique-like building with a window wall system that will mimic the windows of the surrounding historic Pioneer Square neighborhood. He said the rooftop will have a green space, enclosed amenity space and lots of steel cladding.

Olson Kundig began designing the cast-in-place concrete building about three years ago. Using concrete was a premium over steel at the time, according to Coffman. Since then, supply chain issues pushed steel prices higher and concrete is now on par or less expensive than steel, he said.

The project also experienced a shutdown lasting about a year, right after the old parking garage on the site was demolished and crews began moving in some building materials. Coffman said the delay was primarily driven by the pandemic.

Coffman said the local community is excited about The Jack, as construction starts have tapered off in Seattle over the past three years while the opposite is in play in Bellevue. He said the project is a positive sign of things to come in Seattle.

JLL is the leasing agent for both the office and retail space. Its brokers include Lloyd Low, Joe Gowan and Charlie Hanafin.