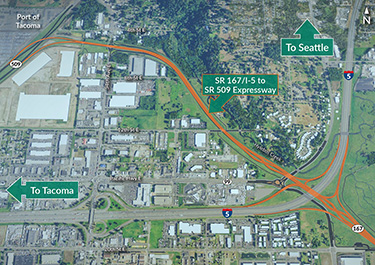 WSDOT image [enlarge]
Atkinson will likely build the first 2 miles of the new SR 167, directly connecting I-5 to state Route 509 and the Port of Tacoma.

The Washington State Department of Transportation last week picked Guy F. Atkinson Construction, pending final award, to build the second phase of the $1 billion SR 167 Completion Project in Pierce County. The agency expects to formally award the contract at the end of the month.

Atkinson was deemed the “apparent best value” contractor for the design-build contract to build a new 2-mile-long expressway connecting Interstate 5 and state Route 509 near the Port of Tacoma. Atkinson's $376 million bid had the lowest price and the strongest technical proposal, according to WSDOT.

“This is an exciting and important step in the decades-long goal to complete SR 167 and build a direct connection between I-5 and the Port of Tacoma,” said John White, administrator for the Puget Sound Gateway Program, which manages the SR 167 Completion Project, in a news release. “The benefits of this new highway will be far-reaching — improving freight movement to and from the port, reducing truck traffic on local roads and expanding non-motorized travel options.”

A big part of the second phase will involve construction of a diverging diamond interchange over Interstate 5 and state Route 99 in Fife. This eventually will connect to a future extension of state Route 167 from Puyallup, which will be the third and final phase of the SR 167 Completion Project. The other end of the second phase expressway will connect to SR 509 near Alexander Avenue East, with ramps to and from 54th Avenue East in Fife along the way.

Bicyclists and pedestrians will be able to use a new shared-use path that will run parallel to the new expressway. The project also will restore about 150 acres, including wetlands and streams, to improve fish runs and encourage the return of wildlife to the area.

Construction of the second phase is expected to start in summer 2022 and finish in 2026.

Atkinson also built the first phase of the SR 167 Completion Project, which included a new four-lane bridge over I-5 carrying Wapato Way East. This bridge replaced the old two-lane 70th Avenue East Bridge, which was closed to vehicles last summer and lies in the path of the future SR 167 extension. Part of Atkinson's new contract includes removing this old bridge.

The final stage of the SR 167 Completion Project will build 4 miles of new highway between Meridian Avenue in Puyallup and I-5 in Fife. The DJC in July reported that construction will take place between early 2024 and late 2028 on this segment.

WSDOT's website says all lanes on the new section of SR 167 will be tolled using automated systems. Rates will be determined closer to project completion, with fares likely higher during peak periods.

An animated video of the future highway can be seen below.