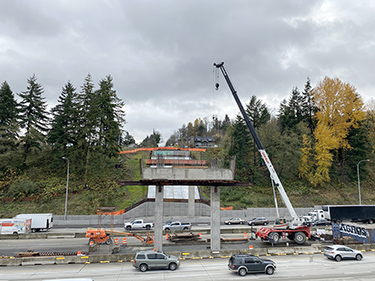 Photo from WSDOT [enlarge]
Crews recently removed cap forms from a pier in the middle of I-5 to prepare for setting girders.

Washington State Department of Transportation is warning motorists to avoid Interstate 5 in Tacoma later this week, as crews install girders over the freeway during three nighttime closures.

The 15 girders are key pieces of the new East L Street bridge that Guy F. Atkinson Construction is building as part of its $160 million contract to widen I-5 for HOV lanes and replace and rebuild a new southbound I-5 Puyallup River bridge. The old East L Street bridge was removed in 2019 so that the freeway could be widened.

Concrete Technology Corp. of Tacoma made the girders, which will support three spans of 105, 107 and 115 feet. Two spans will connect to a pier in the middle of I-5 and the third will connect to an area on the Tacoma Dome side of the freeway. The goal is to set five girders during each nightly closure.

The work is weather dependent.

WSDOT is asking motorists traveling I-5 between Seattle and Olympia during the three closures to use alternate highways, such as state routes 18, 167 and 512.

The new southbound I-5 Puyallup River bridge is part of the final project that will connect HOV lanes to I-5 and state Route 16 in Tacoma. It is expected to fully open next summer along with the new East L Street overpass. Jacobs is the project designer.

An Atkinson official said this weekend's closure will be last full closure of I-5 for the area's HOV program.