Construction costs jump more in Seattle than other US cities 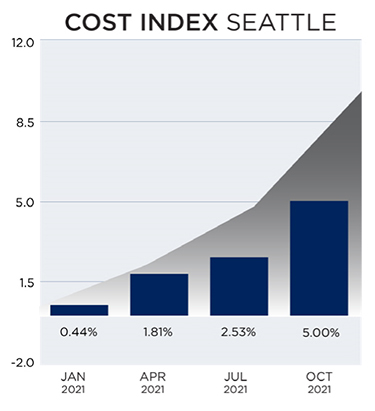 RLB image
Construction costs in Seattle ratcheted up during 2021.

A new report from Rider Levett Bucknall shows a 10.09% increase in construction costs in Seattle for the 12 months that ended in October. The fourth quarter report puts Seattle above 11 other U.S. cities when it comes to construction cost inflation.

Seattle also led the nation in construction price increases between July 1 and Oct. 1, the latest recorded quarter of data. For this period, the national average increase in construction costs was 1.82% — a big jump over the same period in 2020, which was .25%. Seattle logged an increase of 5% over the latest quarter, followed by Boston (2.66%) and Chicago (2.28%). Portland saw a rise of 1.33%. The smallest jumps were recorded for Washington, D.C., at .37%, and Honolulu, at .94%.

Construction inflation was more rampant in Canada, according to RLB's yearly data from two major cities up north. Toronto was the inflation king, with a 13.25% jump, followed by Calgary, with a 10.28% hike. Over the last quarter, construction costs were up 2.44% in Toronto and 1.95% in Calgary.

In the report, Julian Anderson, president of RLB's North America operations, said the cost increases are reminiscent of those experienced from 2004 through 2007. Anderson added that another area of concern is the labor shortage.

“The American Trucking (Associations) claims the industry is short 80,000 drivers,” Anderson said. “Officials from the (Associated) General Contractors have said that while spending on many categories of public construction will increase as the cash from the bipartisan infrastructure bill begin to flow, skilled labor shortages were impacting construction schedules and budgets and prompting some owners to delay or cancel projects. The AGC has urged the Biden administration to invest more in career and technical education programs that serve as a pipeline into construction careers.”