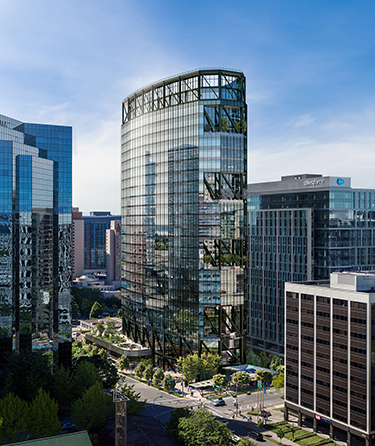 Images from Skanska [enlarge]
Skanska will install Smart Windows in The Eight, a 25-story tower under construction in downtown Bellevue.

There are a lot of smart people working inside downtown Bellevue's vast collection of glass office towers. Now a couple of buildings under construction there will have the “smarts” built into them. But, we're not talking people here — we're talking glass.

View says its windows maximize daylight while controlling glare and reducing heat gain, without the use of blinds or shades.

Smart Windows are made of regular glass with a series of thin nano-coatings that react to electrical charges. Multiple thin layers of metal oxide form the electrochromic coating inside the glass. When a tiny amount of electricity is applied, ions move between the metal oxide layers, causing the glass to tint.

Smart Windows also use artificial intelligence and machine learning algorithms to optimize how much light is let in. Some of those data points include the sun's arc throughout the day, adjoining structures that block the sun during certain times, and where people are seated inside.

Electricity is supplied by controllers in the walls, and the system integrates with a building's lighting and cooling systems. Building tenants can optionally control tinting in individual windows, groups of windows or an entire facade through a cell phone app.

“The greater Seattle office sector is booming, and in a post-COVID market, amenities focused on tenant wellness will be more important than ever,” said Murphy McCullough, executive vice president and regional manager with Skanska, in a news release. “Our investment in View Smart Windows furthers Skanska's commitment to innovation and to enhancing the sustainability of the built environment.” 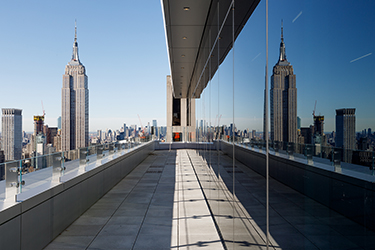 [enlarge]
Skanska previously installed Smart Windows for a renovation of the 1155 Avenue of the Americas office building in New York City.

Milpitas, California-based View says buildings with Smart Windows consume up to 20% less energy for lighting and HVAC. The DJC reported last year that The Eight is targeting the highest levels of LEED and WiredScore certifications.

According to View, the windows improve the health and well-being of building occupants. The company says a recent study found that people working in rooms with Smart Windows experienced half as many headaches, slept 37 minutes longer each night, and performed 42% better on cognitive tests compared to those working in rooms with standard windows and blinds.

The company didn't disclose how much more Smart Windows cost over standard windows, but did say the windows are 1%-2% of the project cost. There could be some savings from forgoing blinds or other window coverings.

Skanska says it has overseen construction of several buildings with Smart Windows, including the renovation of the 1155 Avenue of the Americas office building in midtown Manhattan owned by the Durst Organization, and biotechnology company Regeneron's headquarters in Sleepy Hollow, New York.

The Eight and The Artise are among the first buildings in downtown Bellevue to use the technology. A few other local buildings use Smart Windows, including Watershed in Seattle, the Lake Union Building in Seattle, Parque in Kirkland and the Delta Sky Club at Seattle-Tacoma International Airport.

View says its Smart Windows have been available for about a decade.

Skanska is the builder, developer and owner of The Eight, a 541,000-square-foot speculative office building. In addition to offices, the building will have retail space, a public plaza and seven alternating indoor/outdoor balconies capping its two ends. There also will be a dedicated floor for tenant events, a health and wellness center, and electric vehicle and e-bike charging. It is expected to be finished in late 2023. Pickard Chilton is the lead architect.

Schnitzer is developing The Artise, designed by NBBJ to LEED Gold standards, for Amazon. It is Schnitzer's third project with View. The other two are in Denver: the under-construction 12-story office building called The Current, River North; and the completed (in 2018) seven-story Civica Cherry Creek building, which sold last year for $108 million. Sellen Construction is building the 605,000-square-foot Bellevue tower and is also expected to finish in late 2023.

In another news release, Schnitzer's Zeb Keck said, “View is an integral part of our strategy to deliver a best-in-class experience for our tenants. Following positive tenant feedback on the features in our recent Denver developments, we are excited to once again team with View — this time to create a vibrant environment for Amazon employees here in the Puget Sound.”

Keck is director of construction and development at Schnitzer.

Sri Venkat, vice president at View, said every aspect of future buildings will be designed to optimize occupant health and sustainability.

Smart Windows not smart enough for you? View also has designed Immersive Display, which goes a step further by using building windows to display graphics, allowing users to take notes and create content by writing on touch-enabled surfaces. You could even have your next Zoom meeting in front of several panels of Immersive Display windows.

The company says its products are installed and designed into over 75 million square feet of buildings including offices, hospitals, airports, educational facilities, hotels and multifamily residences.