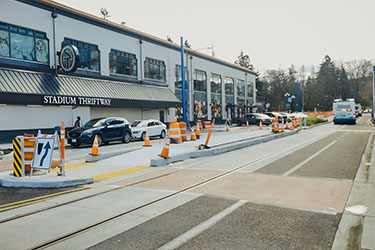 Photo from Sound Transit [enlarge]
New track was in place about a year ago in the Stadium District.

Sound Transit says its Hilltop Link Extension project in Tacoma is behind schedule and needs another $30 million to finish.

The DJC reported in March 2021 that the project was 75% complete and headed toward a finish in May of this year. Sound Transit spokesman Scott Thompson said the project is now expected to open in the first quarter of 2023. He said the general contractor, Walsh Group, has had a hard time meeting its schedule and deadlines for the project. The ongoing concrete worker strike has not affected the project.

Thompson said some of the delay is due to delivery issues with the line's five new rail cars that were expected last summer. Instead, the first car is now scheduled to arrive early next month. Thompson said the manufacturer, Brookville Equipment Corp. in Pennsylvania, has been dealing with worker and supply issues related to the pandemic.

Those new rail cars will have to be tested and commissioned once they arrive. Thompson said he didn't know when the remaining four cars are expected in Tacoma.

The project's budget about a year ago was $217 million, but had increased to about $252 million since then. The price tag will jump to $282 million if Sound Transit's board approves the budget request at its next meeting, set for Feb. 24. The project can't be finished without the new money, according to Thompson.

Thompson said some of the cost increases resulted from delays in design and issues with underground utilities that weren't where they were supposed to be — requiring them to be relocated.

Walsh over the past three years has laid miles of track in the roadway, installed over 300 power poles, and poured many concrete curbs and gutters. It has also had to move a lot of underground utilities. Crews still need to finish canopy glazing and install equipment at the system's seven new stations.

Thompson said the remaining track work, about 10%-15% of the extension, will consist of tying the new track into the existing system at South Ninth and Commerce streets. This work could be done later this year and will require closing the existing system for about a month.

The extension will connect Hilltop residents with the area's medical facilities, downtown and Tacoma Dome station. The project is funded through a partnership between Sound Transit and the city of Tacoma, a $75 million federal Small Starts grant and a $15 million federal TIGER grant.

The entire Tacoma Link line will be 2.4 miles when finished. Trains will run every 10 minutes, about 2 minutes more often than the existing line, which only has three cars. Tacoma Link is free to ride now, but Sound Transit plans to charge once the extension is finished. The board has yet to address how much the fares will be.