Construction input prices soar 21% over the past year 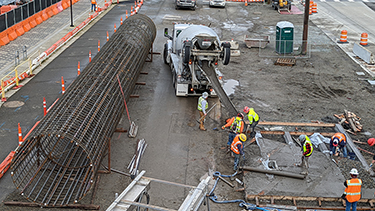 Photo by Benjamin Minnick [enlarge]
Prices are up on a wide range of construction products, including concrete.

Prices of materials and services used in new nonresidential construction leaped nearly 21% in April from year-ago levels, according to an analysis by the Associated General Contractors of America of government data released last week.

The producer price index for inputs to new nonresidential construction — the prices charged by goods producers and service providers such as distributors and transportation firms — rose 0.8% from March to April and 20.9% over the past 12 months. The AGC pointed out a wide range of costs rising by double-digit rates, led by an 86% spike in the price of diesel fuel, 45% for aluminum mill shapes, 32% for architectural coatings such as paint, 30% for plastics, and 21% for roofing asphalt and tar products.

“Nonresidential contractors have endured 12 months of 20% increases in the cost of items they need to build projects,” said Ken Simonson, the association's chief economist, in a news release. “While they have been able to pass some of those increased costs on to clients, most of those increases have come out of their own bottom line.”

An index for new nonresidential building construction — a measure of what contractors say they would charge to erect five types of nonresidential buildings — rose 4.1% for the month and 19.9% from a year earlier. April was the 19th consecutive month in which the cost index rose more than the bid-price index on a year-over-year basis, Simonson added.

In addition, there were double-digit increases in several other price indexes that affect construction costs, Simonson noted. He cited as examples the index for insulation products, which rose 19.6% over 12 months; gypsum products, 17.8%; copper and brass mill shapes, 16.8%; paving mixtures and blocks, 14.4%; and concrete products, 10.9%.

The Associated Builders and Contractors, another construction association, noted that input prices were up in 10 of 11 subcategories in April. The one category that saw a price drop was softwood lumber, down 17.7% for the month.

“There are some economists who believe that inflation has peaked,” said ABC Chief Economist Anirban Basu in an another news release. “Even if that were true, stakeholders should not expect dramatic declines in inflation in the near term given an array of factors placing upward pressure on prices: the Russia-Ukraine war, COVID-19, a shrunken labor force, elevated transportation costs and abundant demand for goods. (Thursday's) PPI release indicates that producers continue to ask for and receive elevated prices for their limited production. These high input prices will continue to circulate through the economy as production continues, whether in the form of manufactured goods, buildings or infrastructure.”

Basu added that many contractors report that demand for their services remains strong enough for them to pass along most of their cost increases to project owners. “But at some point, the economy could weaken to the point that purchasers of construction services become less willing to pay elevated prices,” he said.

“The Federal Reserve is now in the middle of what will likely prove a lengthy monetary tightening process, and higher borrowing costs are rendering project starts less likely, all things being equal,” Basu noted. “That said, certain segments are likely to power through this dynamic, should it happen. That includes public construction, given the recent passage and ongoing implementation of a large-scale American infrastructure package. It should be noted that recent inflation has reduced the return taxpayers will get per dollar spent on infrastructure.”

The AGC is pushing the Biden administration to end tariffs on key construction materials and reconsider its recently proposed Buy America regulations.

“Inflexible tariffs and overly restrictive regulations are making it harder for contractors to find and pay for key materials,” said AGC CEO Stephen E. Sandherr. “Needlessly inflating the cost of construction and leaving employers with less money available to hire new staff is a bad way to rebuild infrastructure or boost the economy.”