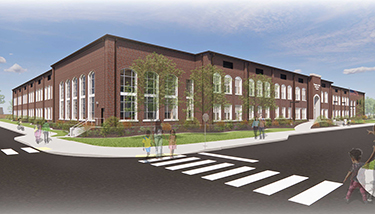 Image from Skanska USA [enlarge]
The new Terminal Park Elementary will be built in a classic design.

A few years back, Skanska won the general contractor/construction manager contract to build four elementary schools as one package with a maximum construction cost of $120 million. The contractor is now down to its final school, Terminal Park Elementary School, which it says it recently started construction on.

“The Auburn community is excited to begin work to replace Terminal Park Elementary, the school district's oldest school,” said Jeffrey Grose, executive director of the district's Capital Project Department, in a news release. “While this facility has served us well, the new school will be an attractive building with a classic design, larger capacity, and state-of-the-art facilities.”

Terminal Park is at 1101 D St. S.E. in Auburn. The new school is being built in its place, with students using the old Olympic Middle School for the next year.

The new 74,000-square-foot school will serve about 650 students in preschool through fifth grade. The building will have general and specialty classrooms such as music and special education, a gymnasium, library, kitchen, covered play area and administrative offices. Site improvements will include a playground and playfield, student pick-up and drop-off area, bus loading and unloading, as well as staff, event and visitor parking.

“Our work on Terminal Park Elementary will bring updated classrooms and play areas, as well as easier, safer access to outdoor fields and parking lots,” said Brian Urban, vice president and project executive at Skanska, in the release. “We look forward to creating a bigger, better school for our Auburn families.”