Treasure, traffic and other trademarks of working on Seattle’s waterfront

A special urban shoreline, Seattle’s waterfront presents a unique set of challenges and considerations to design teams. As engineers, we’ve learned what to expect on waterfront projects, each presents a combination of bad soil, buried treasure, tunnel and transit challenges, and demand to align with the city’s evolution.

Ask anyone with experience building on the waterfront about common challenges, and they’re likely to say the same thing: soil.

Our city’s soil is a well-known issue; a factor the team considers from day one. Design teams understand that signing up for waterfront projects mean signing up to build something on contaminated, wet, liquefiable soils that used to be underwater.

These waterfront soils are made up of two layers. The first, a pre-Denny Regrade layer, includes large timber and milling deposits and no-compaction (extremely wet) soils. Sitting above that is the second layer, a large deposit of poor soil. The result is a surface that’s terrible at supporting loads. Projects are guaranteed lots of geotechnical issues to work through. Understandably, it’s typical for waterfront projects to minimize below-grade square footage, usually capping at one or two levels. 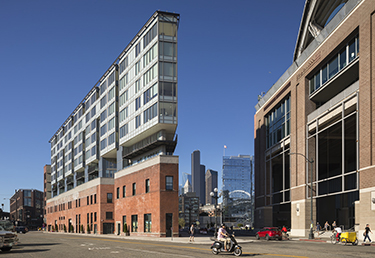 Photo by Lara Swimmer [enlarge]
With a front row seat to Seattle’s ongoing transformation, Gridiron condos are situated at the intersection the Pioneer Square, the Stadium District and Waterfront Park.

Working on the waterfront is a bit like an archaeological dig. Thanks to the area’s history, the soil serves as a kind of time capsule, you truly never know what will show up. I find these encounters fascinating, a trait I inherited from my dad who worked construction in this area for years. As a kid, I remember marveling at his collection of “treasures” he’d pulled up on job sites.

While the occasional vintage Coke bottle is charming, not every find is quite so amiable. Timbers, big beams left over from milling, and even old industrial operations reveal themselves during drilling and excavation. Local teams are used to these finds. They come with the territory and we know that there’s not much you can do in advance. Each is unique, so the best prep we can do is anticipate surprises and deal with them as they pop up.

Some of the area’s most memorable finds: “Meg” the giant ground sloth was uncovered at Sea-Tac Airport in 1961. (The ‘60s yielded many prehistoric finds, five specimens are now archived in the Burke Museum’s collection.) Then, in February 2014, a team unearthed a Columbian mammoth tusk at a South Lake Union construction site. More recently, Stadium Place revealed a large section of railroad operations and Bremerton’s Marina Square happened upon a buried privy.

Another key consideration for any urban waterfront: tunnels and transportation. And while poor soils and buried treasure is something we’ve always encountered in this region, the complexities of tunnels and transit is somewhat new. 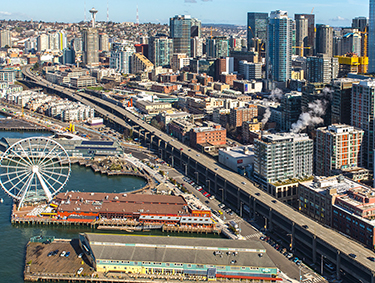 As a team, we must navigate around these pieces, not only ensuring our designs fit into the city’s puzzle but ensuring our projects create minimal disruptions when in construction. Of course SR 99 is the most notable, stretching the length of the waterfront, and finally open and operational. We know that Sound Transit is considering another commuter tunnel too.

Designs are drastically impacted by what lies below them. In the case of a tunnel, teams have to be careful about building above, usually opting for a plaza or similar non-weight-bearing solution. 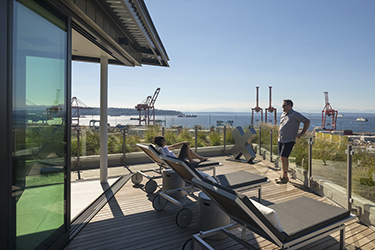 And the ongoing Waterfront Park development is a prime example, changing the way Seattleites interact with their urban shoreline. Anchored by Pier 62, Waterfront Park stretches from Belltown to Pioneer Square. The massive project is the brainchild of a collective including Friends of Waterfront Seattle, the city of Seattle and numerous community partners. The vision is for an open, accessible park with emphasis on public gathering spaces.

The full park is slated to open in 2025, and projects along the route must coordinate extensively with the planning team. Teams must communicate early, understand current Waterfront Park phases and checkpoints, and ensure projects integrate with the master vision.

The ripple effect is real, especially for civil plans. Even blocks away, projects are impacted as pedestrian crossings and bridges, waterfront connections, safety improvements, and increased trucks and traffic must be considered. And the increased trucks and traffic shouldn’t be underestimated. As the demand for connectivity increases, a pseudo freeway running to the south end of Colman Dock (each direction included two general-purpose lanes and a transit lane) complicates plans and designs. As civil engineers, we coordinate extensively with SDOT, but at the waterfront, that coordination is vital and complex.

Working at the waterfront presents a unique set of challenges and factors, but it also yields some of our most exciting and rewarding projects — projects that are cherished by the community, unique in their design, and unrivaled in their mountain and sea views. It’s truly a special brand of build that’s exclusive to Seattle.

Kyle Malaspino is a civil associate principal at Coughlin Porter Lundeen, with extensive experience working with the city of Seattle and congested urban sites.