By WILL ADAMS and PRUTHA CHIDDARWAR
Mortenson

It’s no secret there is a shortage of new workers entering the construction industry. According to the U.S. Bureau of Labor Statistics, 402,000 construction positions remained unfilled at the end of October 2021 — the second-highest level recorded since data collection began in December 2000. This issue has been compounded by the pandemic, the Great Resignation — leading workers to quit their jobs at near-record levels — and younger workers who just don’t think the architecture, engineering and construction industry would be a rewarding career path. While a common misperception, never before has the AEC industry offered so many diverse career paths to so many.

Case-in-point: Will Adams with Mortenson Seattle, who has carved out a unique position for himself based on his interests and passions in both technology and architecture.

While pursuing his master of architecture degree at the University of Minnesota, Adams discovered immersive virtual reality and its potential to impact design and construction. During that program, he began researching real-world applications of VR with Mortenson. In 2013, Adams moved to Seattle to live in a VR/technology hot spot and work full-time for the top-20 builder, developer, and engineering services provider.

Adams is now living his childhood dream of being an inventor as a project solutions technologist with Mortenson, where he has been charged with building a division focused on developing and applying emerging technology. His passion for architecture, programming, and novel technology has led him to explore how the intersection of these fields can positively impact the rapidly changing building industry. 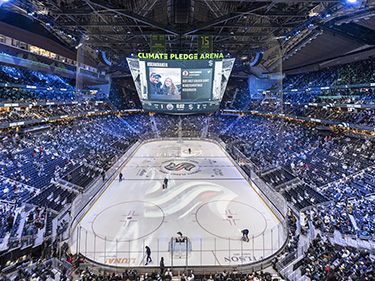 In his developer role, Adams has built VR models for almost every type of construction use — from health care projects where doctors and nurses can meet in the same virtual operating room to fully immersive and collaborative virtual environments for complex, multi-use facilities such as Seattle’s recently completed Climate Pledge Arena.

“At Mortenson, the projects that we use VR-based programs for often reflect the first time we have ever used virtual reality in that way. There is a lot of ambiguity and invention required. It’s very challenging, but also incredibly rewarding,” said Adams.

A recent favorite project Adams worked on was creating a simulation of the new Arizona State University hockey/multi-use arena designed and constructed by the Mortenson Seattle team.

“The ASU project team asked us to create a mini-hockey game to get recruits and students excited about the arena, and we ended up executing their ask with a physics-based VR game that requires users to catch a pass and shoot it at a goalie. It was a great challenge that led to an entertaining game on an ultimately really fun project,” said Adams.

So, what has it taken Adams to excel in his role? “While earning a master of architecture was the most impactful part of my education, teaching myself to code and experiment in game engines — as well as working and learning in the AEC industry for 20 years — has definitely been important.”

Prutha Chiddarwar also found a rewarding career as a field engineer in preconstruction for Mortenson Seattle, where all her previous experiences coalesced into contributing towards her success.

Chiddarwar’s path to the industry started early: observing her father working as an architect in India inspired her creativity. In college, she pursued a bachelor’s in architecture followed by a master’s in urban design from University College London. She soon realized that projects entail much more than designing — and decided to pursue a construction management master’s degree at the University of Washington, when she also started as an intern with Mortenson.

“My internship at Mortenson provided an exposure to construction means and methods, technical skills, company culture, and soft skills which have become essential in the construction industry — and definitely helped to put things in perspective,” said Chiddarwar.

As a field engineer in preconstruction, Chiddarwar works with the estimating team and the design phase management team. Her role includes cost estimation for projects at various stages of design, bidding, cost modeling, value analysis, and assisting with target value delivery. In this role, her past professional experiences in architecture and urban design bring different perspectives and help the team achieve common visions for the project and client.

One of Chiddarwar’s most rewarding jobs was working on Western Washington University’s new carbon-neutral Electrical Engineering and Computer Science Building, where she and the design and preconstruction teams worked towards value-engineering goals for the school. Her architecture background gave her the tools to dive deep into the details and recommend changes to get closer to the program the customer wanted.

“My job brings me fulfillment in many ways,” continued Chiddarwar. “My role as a preconstruction field engineer helps me bridge the gap between architecture and construction. I enjoy understanding the client’s vision and determining the cost impacts of designs. All the skills gathered from architecture, urban design, and construction come together for me to make important contributions. It is very rewarding at the end to say: ‘I helped build that.’”

What should those who are interested in a career in the construction industry consider before pursuing their path? Talking to various professionals in the industry to understand the many available paths is a smart move before furthering education or choosing a role. The Washington ACE Mentorship Program also helps high school students secure internships in the construction industry to help carve out their paths.

Chiddarwar agrees, “Construction involves people with different expertise, and everyone can choose a path depending on their passion.”

When asked if working in the construction industry is a promising career path, Adams responded, “I think it’s a great career path because it’s interesting and there is a need for talented individuals who are interested in bringing a fresh perspective to an ancient profession.”

Will Adams is a project solutions technologist and Prutha Chiddarwar is a field engineer, both with Mortenson Seattle.