Trifecta of projects converge on the Seattle waterfront 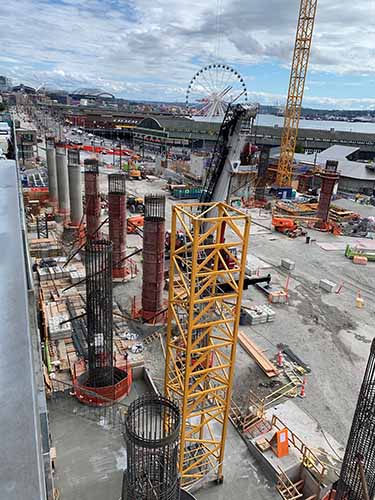 Photo by Brian Miller [enlarge]
Hoffman Construction Co. is installing the tower crane for the Overlook Walk project. Behind, Turner Construction is using a second tower crane to build the Ocean Pavilion.

A convergence of construction is happening along the waterfront near the Seattle Aquarium. Here, crews from four different construction companies are building the $70 million Overlook Walk, $113 million Ocean Pavilion and a new section of Elliott Way that is part of the $189 million Alaskan Way rebuild.

The tower crane for the Overlook Walk project is going up adjacent to the tower crane for the Ocean Pavilion project. Hoffman Construction Co. is building Overlook Walk, which is a key piece of the waterfront rebuild overseen by the city's Office of the Waterfront and Civic Projects. It will connect Pike Place Market with the waterfront by building a new bridge over Alaskan Way with accessible walking paths, an elevator, and informal spaces for people to rest. There also will be a new cafe, play toys for kids including slides, and amphitheater-type seating near a promenade that will be part of the new waterfront. Construction started in June and is anticipated to be complete by 2025.

The city is coordinating with Pike Place Market and Seattle Aquarium, as Overlook Walk will tie into their existing and new spaces, including the MarketFront addition that was finished in 2017 and the Ocean Pavilion project, where construction started in winter 2020.

Ocean Pavilion is a 50,000-square-foot standalone addition to the aquarium designed by LMN Architects and being built by Turner Construction. It will feature a 325,000-gallon tank stocked with sharks and stingrays native to the South Pacific when it opens in spring 2024. Thinc Design and Shiels Obletz Johnsen are also on the project team.

The new section of Elliott Way will give vehicles a link between the waterfront and Belltown. It will wrap around the back of the Waterfront Landings condominiums and climb to near Lenora Street before connecting into an existing couplet of Elliott and Western Avenue at Bell Street. There will be sidewalks, as well as bike lanes, on either side of the roadway.

The reworked waterfront, which cost $756 million, will stretch from Pioneer Square to Belltown. It will have 20 acres of new public spaces, including bike paths, walkways and parks.