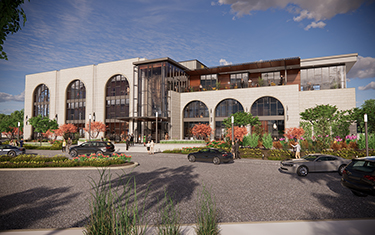 Renderings by NAC Architecture [enlarge]
The performing arts center will be three stories tall with 59,000 square feet of space.

Backers of a new $48 million performing arts center in the city of Spokane Valley will break ground on the project tomorrow. It will be called the Idaho Central Spokane Valley Performing Arts Center, and will be built on 5 acres of vacant land at 13609 E. Mansfield Ave., next to the new Tru by Hilton hotel.

“The Idaho Central Spokane Valley Performing Arts Center will not only contribute to the Inland Northwest in professionally artistic and cultural ways, it will be a huge influence on hospitality, tourism and economic growth,” said Marnie Rorholm, managing director of the center, in a news release.

Designed by NAC Architecture, the 59,000-square-foot building will have a main theater with about 475 seats in upper and lower bowls, and a flexible studio theater that can seat 200. A fly loft will be provided above the main stage for technical productions. Seats in the main theater will be extra wide with double arm rests and extra leg room. Two elevators and double the required wheelchair seating will help the center reach ADA compliance.

The studio theater will have high ceilings and movable seating for multiple configurations. It will be home to an acting conservatory for local youth in grades 2-12 that will include classes, camps and performances. 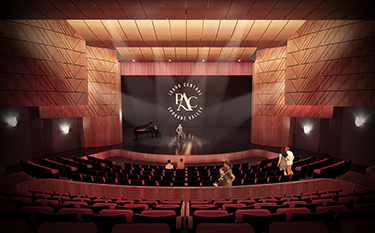 [enlarge]
The center’s main theater will have extra wide seats in upper and lower bowls.

There also will be space for events and business meetings on the top floor with views of Mt. Spokane and Mica Peak, and peek-a-boo views of the Spokane River. Here, two event spaces will be able to be combined into one to accommodate 400 guests in an open concept. These spaces will connect to an outdoor terrace. A caterer's kitchen will provide on-site food and beverage service.

The site will have 300 parking stalls and a circle drive for drop-offs and pick-ups. An outdoor garden will have a fountain designed by local artist Vince DeFelice.

Garco Construction is the general contractor. The Spokane-based company will start construction this fall and complete the job in June 2024.

The first theater production will be held in summer 2024. Organizers hope to put on 130-144 events per year in the main theater and about 80 in the studio theater.

Initially, the project cost was expected to be $36 million. The center says the price jumped due to increased labor costs, supply chain issues and inflation. Of the current estimated $48 million overall project cost, $32.7 million is earmarked for construction.

A 5-year capital campaign, now in its second year, continues with some naming opportunities still available. The Spokesman-Review reported last month that Idaho Central Credit Union signed a lifetime naming rights deal for the center without disclosing financial terms of the deal. The newspaper noted that the credit union opened its first branch in Washington earlier this year, in Spokane, and is planning new branches in north Spokane, Liberty Lake and Spokane Valley.

Idaho Central Spokane Valley Performing Arts Center is being built in the new Mirabeau neighborhood, the last piece of undeveloped riverfront property in the city of Spokane Valley, according to project backers.